Somehow I lost my notes, so here goes my trip report from memory.

It rained on & off this morning as everyone was getting up & situated to leave. Jen & Curt were heading NOBO towards Whitetop. I had thought about going north too, to cut off the chunk of AT I hadn’t hit yet, but that would entail another night’s stay, and I was running low on food. I didn’t want to chance it.

Skink & his nephew headed SOBO back to Damascus. I told him I’d link up with him for lodging once in town.

Not wanting to get wet again, I procrastinated at the shelter, conversing with the hammock guy with the crazy, curly blond hair. His trail name was Nightwalker. He told me how he had a total knee replacement last year, showed me the scar, and said when he started the trail this year he was only doing about 5 miles per day. He must have seen the look on my face, indicating that he’d never make it to Katahdin before OCT 15, because he quickly added- “I’m going to Harper’s Ferry, then flip-flopping up to Katahdin”. Ahh, there ya go.

We chatted about mundane things (remember I really didn’t want to walk in the rain). One thing that caught me off guard was when he asked about what kind of music I listened to. He said he likes rap, but not the new stuff out today, “except for Kendrick Lamar. He’s good”. Umm, what? He then floored me. “My favorite rapper is Tek-9”. Excuse me? Holy crap, never in a MILLION years would I have thought this guy to like rap. Gangsta rap. Goes to show you- never, EVER judge a book by its cover! The trail does that; shows you how cool some people can really be.

END_OF_DOCUMENT_TOKEN_TO_BE_REPLACED

The clearest way into the universe is through a forest wilderness.
– John Muir

Sometime during my hike today I decided that I wasn’t going to write anything down in my journal.

Maybe because there was entirely TOO MUCH going on for me to stop and write. There’s a lot of words piled up waiting to escape my head, so *deep breath* here goes:

Got packed up in the morning & was back on the side trail to the AT just before 9 a.m. (I need to work on breaking camp faster). Now, the blue-blazed side trail makes a loop to the AT, intersecting it at two points with the shelter in between. I could have turned left and hit the AT a little further up ahead (and taken a shorter route) , BUT I didn’t want to “miss” any white blazes, so I went right on the side trail, and picked up the AT exactly where I left it yesterday.

I guess you could call me a “purist” but since I’ve been doing the AT I haven’t skipped or bypassed a single white blaze, nor do I intend to, at least for now. It’s just a thing I have. When I went back up to Grayson Highlands in May and started up NOBO from Elk Garden, I made sure I went PAST the waypoint marking where I had stopped Easter weekend.

So anyway, I’m heading up toward Lost Mountain Shelter, stopping every so often to take pictures and mark waypoints of campsites along the way. At one point trail carried me over a very rocky, narrow ridge maybe no more than 12 feet wide. Shortly after I came to a small break in the treeline with a so-so view out to the mountains.

END_OF_DOCUMENT_TOKEN_TO_BE_REPLACED

Set a stout heart to a steep hillside. –Scottish Proverb

I departed Charlotte at 1145 this morning after screwing around buying some last minute items and getting my camera and tripod set up for the trip (in case there was any interesting stretch of road I wanted to film). Arrived in Damascus at 1500. Right off the bat I realized just how accurate Google Earth Street View is. It was if I’d already been here a few times.

Damascus (nicknamed “Trail Town USA”) is a little hamlet in southwest Virginia, just a few miles from the Tennessee border. Its population is about 800 people, and there are pretty much only two roads running through it. Okay, not literally, but it’s very small. The Appalachian Trail runs right through town; it was pretty cool seeing the white blazes on utility poles, and pretty much everything is within walking distance- less than 1.5 miles one way.

Despite it’s size, four major recreational trails crisscross through it: The Appalachian Trail, The Virginia Creeper Trail & Trans-National Bicycle Trails, the Iron Mountain Trial, and a few others. What it lacks in population, it certainly makes up for it in charm

So anyway, I parked at Mount Rogers Outfitters (MRO) and was immediately greeted with that small-town charm. I told the guy at the desk I was supposed to be shuttled out to Straight Branch. He told me Bill would take me, but he was running a few minutes late. No problem, I walked around the store checking out all their stuff. It seemed obvious that they were all about backpacking & camping. Nice. I spied a couple of things I wanted to grab before the end of the trip.

Bill showed up and said I could park across the street at Dave’s Place (the hostel they run) and for $2 per night. We loaded up (with his little dog whose name I think he said was “D.O.G.”) and made the 10 minute or so trip on US 58 out to Straight Branch. Along the way he pointed out the numerous campsites along the banks of Whitetop Laurel Creek, the stream that parallels the Creeper Trail. He then mentioned that he had pretty much lived along the banks for quite some time, and he’s known as the “Creeper Keeper” for his efforts to keep it clean. Well to each his own. At least he was very helpful explaining the re-routing of the AT where a bridge had been washed out.  He also mentioned that a giant salamander called the Hellbender, lives along the creek. I’d like to NOT meet one, thank you. 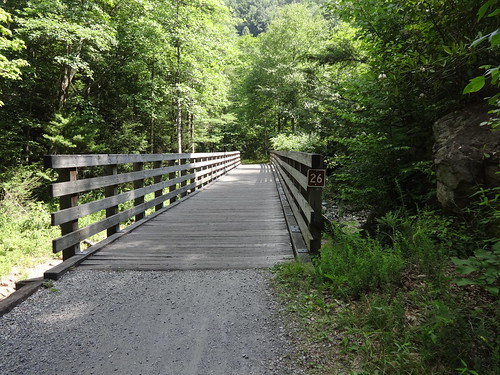 END_OF_DOCUMENT_TOKEN_TO_BE_REPLACED

An early-morning walk is a blessing for the whole day.
-Henry David Thoreau

Last night about 0100 a fly was stuck between the tent and my rain fly. That bastard buzzed so much it woke me up. I spent the next 10 minutes torturing him by flicking him through the no see um netting every time he landed. If I have to deal with him he’s gonna have to deal with me. I think he eventually died from blunt force trauma due to getting thumped by my finger. There was a strange flashing light outside my tent. Didn’t seem to be a firefly, because it would faintly blink or flash 4 or 5 times, then move around to another side of the tent. See, this is the shit I don’t like. Scary forest mystery creature crap. If someone is being funny, ha ha I have a joke for you if you keep it up, but I didn’t HEAR anything. My eyes must be fooling me. Just bury your head back in your stanky sleeping bag and go back to sleep.

Nothing got in my food or trash bag hanging from the tree last night. Now it was time to tackle Hump Mountain (mile 386.9; elev 5587). Again, the trail was very narrow which made for another “sobriety test” walk. This part of the trail is often photographed as well- it has a very distinct, treeless area cutting a wide swath up the mountainside. It was steep enough, and soon my left big toe started disagreeing with the inner edge of my insole. The guide said Hump has a few false summits as well, so when I had reached the summit it was a minute before I actually realized it. Saw a snake for the first time; he was a baby maybe 5 inches long and brown. He slithered in the grass before I got my camera out. Well, I did make good time coming up- took me 56 minutes. Cool.

Looking back, I don’t remember which climb was tougher, summiting Roan Mountain or summiting Hump Mountain. I went up Roan in the afternoon, so my legs weren’t fresh, but I did Hump on the last day of the trip, which is a negative too. The trail up Roan was also obviously reouted to create numerous switchbacks- several times I crossed over what was the old path going straight up. Rain was what made my ascent up Roan miserable, but in hindsight I think Hump was tougher because the trail took a more direct path to the summit. 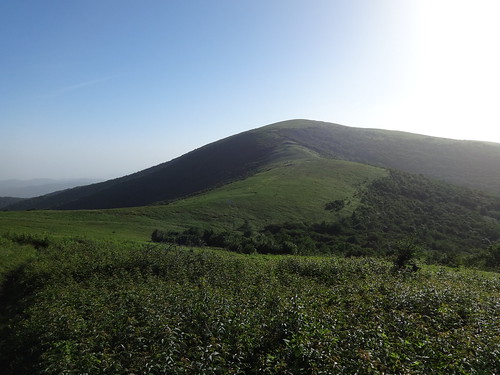