-My newest (and biggest to date) trek- hiking the Great Smoky Mountains National Park end to end along the Appalachian Trail. All waypoint mileages are measured in the trip miles AND their northbound distance from Springer Mountain.-

My trip this time out was going to be somewhat of a group meetup- I met Paul (Sondance Kid), Nora (the Explorer), and Micah (Lil Britches) on Whiteblaze- they’re hiking on to Hot Springs after I get off the trail at Davenport Gap. Since I was apprehensive about sleeping in the shelters (after reading several accounts of renegade mice sprinting across hikers’ faces), I figured it would be a little better with people I at least knew for more than 3 hours. I arrived in Gatlinburg yesterday and after briefly meeting the crew and watching the race, spent an hour or so walking up and down this strange little tourist trap in the middle of nowhere. That night I weighed my pack, and it topped out (with three days of food, minus water) at 19.4 pounds. With a full load of water, I’d still be right at 27 pounds, and that’s pretty manageable. One liter of water= 2.2 pounds= 35.2 ounces. Ahh, the things you commit to memory! 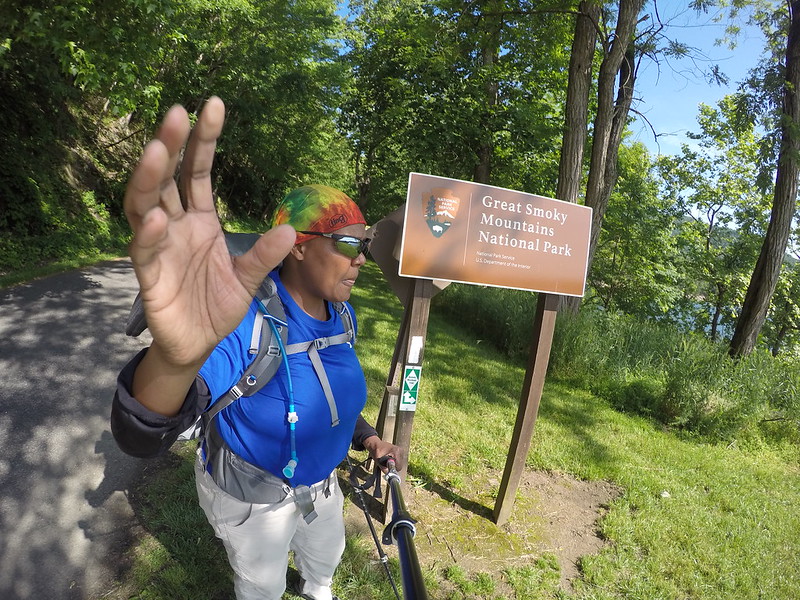 The four of us met the next morning at Newfound Gap (where US 441 crosses the park) and were shuttled by Vesna from the shuttle service A Walk in the Woods, leaving promptly at 0800. She was very knowledgeable about the Smokies, and instead of catching a few z’s on the trip I was listening intently to what she had to offer up.

“The Smokies are home to an estimated 1,600 black bears, two per square mile”.

“The mountains were formed approximately 200-300 million years ago, making them among the oldest mountains in the world.”

“It is one of the largest blocks of old-growth forest in North America, and boasts the southernmost boreal spruce-fir forest on the continent.”

“This will be a very challenging hike. Your total elevation gain with all the ups and downs will be just shy of 20,000 feet.”

Sounds good, let’s get to it. 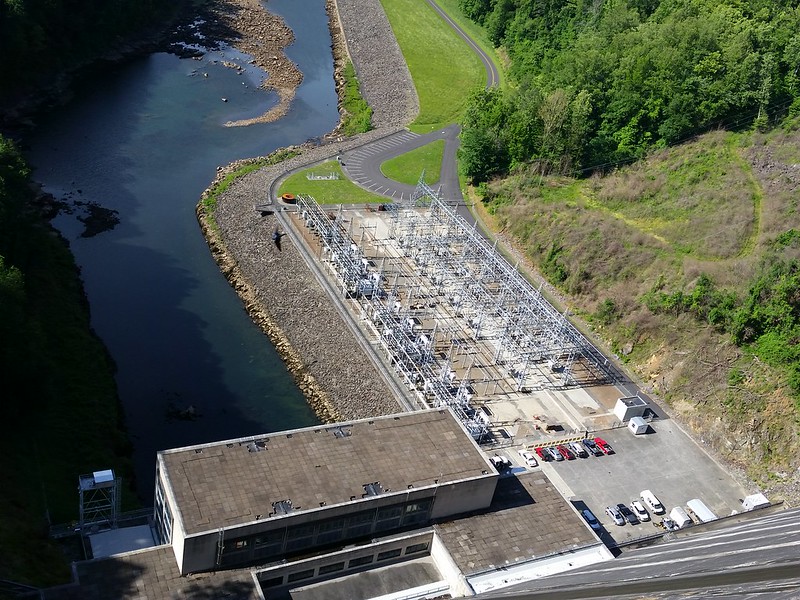 We arrived at the Fontana Dam Visitor’s Center (elev 1700 ft; AT mi 166.3 / trip mi 0) about 0930, and after the requisite last rites on the porcelain thrones (to no avail, my intestines were locked up tighter than airport security) we set off. I had initially started to walk back to see the “Fontana Hilton” shelter- I’d heard it was pretty nice as far as shelters go, but Paul was calling out to me- guess he wanted to start as a group I guess. With my Go Pro camera rigged on a stick pic (that I eventually lost halfway up to Shuckstack), I was able to get some excellent footage walking across Fontana Dam. As we were crossing, what was undeniably the Shuckstack Fire Tower on the ridge jutted upwards from the mountain.

Fun Fact- Fontana Dam, completed in 1944, is the tallest concrete dam east of the Rocky Mountains.

The first two miles weren’t too bad, it was a road walk across the dam and then alongside the same road entering the park, but then it shot straight up. Welcome to the Smokies. Nora went up ahead of us while Sondance & Britches chatted heartily on the way up. 4.5 miles later at 1245 we took the Shuckstack fire tower (elev 3889 ft; AT mi 170.8 / trip mi 4.5) side trail. A few other hikers there eating and resting. No one really wanted to climb the tower; some were afraid of heights, but hell, might as well. The weather was pleasant and I wasn’t too tired (yet). There wasn’t really any need to go all the way to the top- I just wanted to be above the surrounding trees on all sides. There was another hiker named Harper who was doing a LASH (Long A** Section Hike) from Springer to Hot Springs. (Conversely, I do what I like to call SMASHes- Small A** Section Hikes). 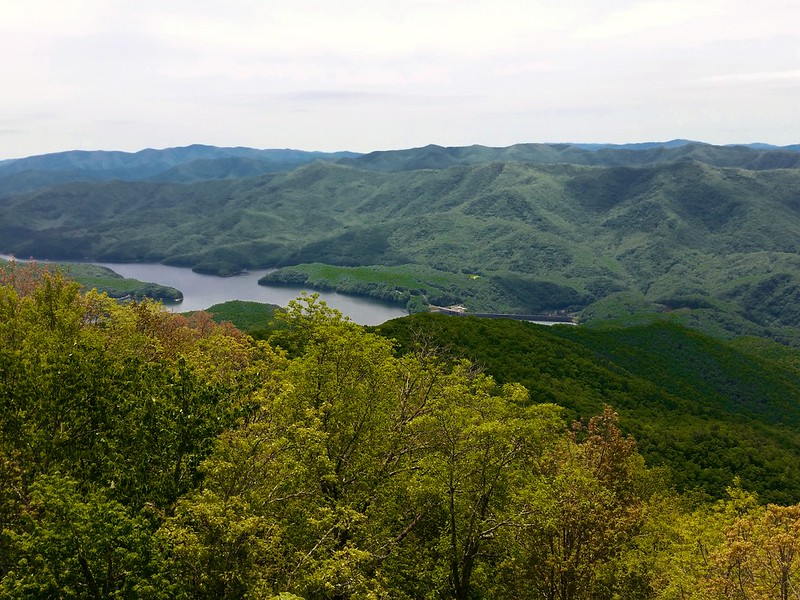 At the Birch Sping Gap campsite (elev 3736 ft; AT mi 172.1 / trip mi 5.8) I took a much-needed break and scarfed down a Snickers bar in less than a minute. For some reason, my appetite was in full swing because I was willingly accepting dried apples and jerky from the ladies as I just couldn’t satiate my hunger. Oh yeah, it was the mountain I was climbing that was responsible for my munchies I guess. 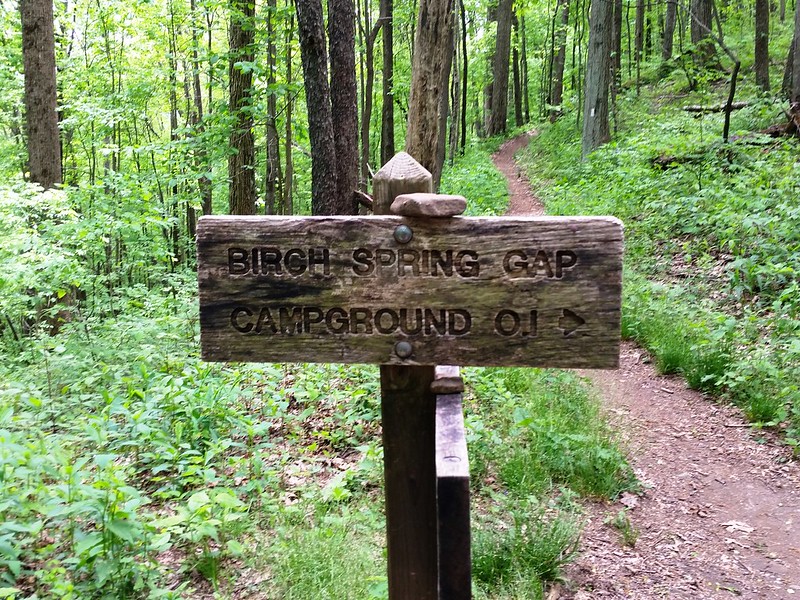 Holy hell what a climb out of Fontana it was. It went up. UP. And UP. And then UP some more. Everyone was walking very slowly and steadily. I can’t do that for some reason. I like to (or need to, I can’t tell) take longer strides at a slightly faster pace. Unfortunately, this tires me out very quickly, so on a very steep incline, I end up stopping every 60-70 meters or so to catch my breath for about 15 seconds, then I’ll continue. I was doing pretty good training earlier this spring with a 36-pound pack, but wasn’t doing inclines like these, and not for this long either. Plus, all my training had come to a sudden stop the last two weeks before I went out. At least the steroid shots in both hamstrings were doing their jobs- the old hammies weren’t giving me grief like they usually do. No sciatica either, and that made me happy.

Stopped again at Ekaneetlee Gap (elev 3842 ft; AT mi 175.6 / trip mi 9.3) for another quick break and to take my pack off again. Topped off with 3L of water because I’d heard the spring at Mollie’s Ridge was” somewhat reliable” according to the guide. I would soon regret that decision.

Finally arrived at Mollies Ridge shelter (elev 4,586 ft; AT mi 177.3 / trip mi 11) at around 1730. There I met flip-flop thru-hiker “Stitch” from Florida- he’s doing his 3rd thru hike. He also hiked the PCT and the Florida Trail. I couldn’t help but wonder where does he get the time & money to do that? He’s not married, has no kids, oh well, I guess he’s living the life of Riley, but I didn’t ask. Some people like to leave a little mystery and he was just that kind of guy. 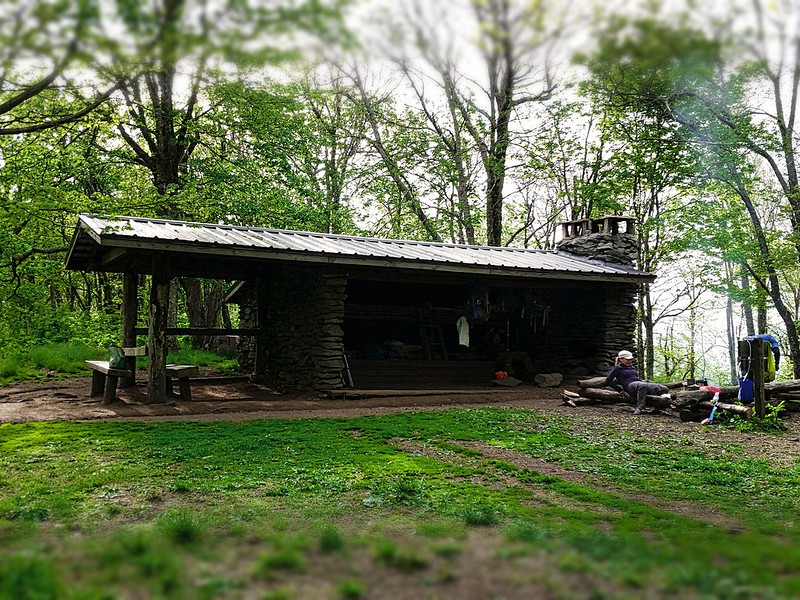 Fun Fact- According to an old Cherokee legend, Mollie was a woman who died on this ridge searching for her lover after he failed to return from a hunting trip.

I lost the tightening screw to my stick pic somewhere on the way up because it was no longer attached to my trekking pole. Well, that lasted all of 2 hours. Before the next trip, I’ll have to find a way of engineering a rig that won’t come off so I can continue to use my Go Pro.

To my dismay, it seemed like everyone saw a bear today except me. Nora saw one when she went to get water. It was the funniest thing- she volunteered to take everyone’s bottles. About 30 seconds after she left the shelter, she came back walking rather briskly, shaking her head with her eyes wide. “Uh-uh, no water. There’s a bear down there” she said. Apparently, he was in a tree, and jumped down & ran away when she got close. Sondance & a few others could see it from the bear cables. I had my shoes off & didn’t get over there in time. A hiker named “Grande” and his girlfriend came in later that evening right before sundown. He’s nicknamed Grande because he’s about 6’5” and skinny. He said they had seen four (!) bears at the Birch Spring Gap campsite.

Harper chimed in and said he’d seen one at Ekaneetlee spring on the way to the shelter. Yes, the same spring where I’d carried all that unnecessary water. I say unnecessary because later on I went to get water here at the shelter and the spring was just fine, thank you very much.

For dinner, I had one of my favorite Mountain House meals, the Mexican style rice & chicken that turned out to be more of a “sopa” than anything because I added too much “agua” to the bag. It didn’t matter- I was bound and determined to eat whatever soupy mess I had concocted tonight.

The shelter wasn’t as bad as I thought it would be. It was actually pretty nice for a wooden building housing smelly transients in the wilderness. There were only about nine people actually sleeping inside the shelter; a few thru hikers came up & immediately set up their tents outside. Lucky. I’d love to sleep in my tent.

1 thought on “Straight up, no chaser”