-My newest (and longest to date) trek- hiking the Great Smoky Mountains National Park end to end along the Appalachian Trail. All waypoint mileages are measured in the trip miles AND their northbound distance from Springer Mountain.-

I woke up from a restless night of sleep totally spun around in my sleeping bag. Normally, if I lay on my back, the bag zips up on my left side. Somehow I managed to get the bag rotated around me in such a way that the hood was on top and the zipper was on my right side. The new Thermarest NeoAir XLite in combination with my rain fly (covering the floor) AND my sleeping bag made for quite the slippery evening.

Silnylon (nylon impregnated with silicone for supreme water resistance) is very good and reliable, but it’s slippery as all get out. Same goes for all the uber-lightweight fabrics most of my gear is made out of. It’s a well documented problem that sleeping pads inside tents are notorious for sliding around, and last night was no different. Sadly for Grande, I kept inadvertently kicking him in his feet in my feeble attempt to re-center myself in the sleeping bag on my pad. He chuckled and said I was doing 360 degree rolls all night not unlike an alligator doing “death spins”. Such is life. 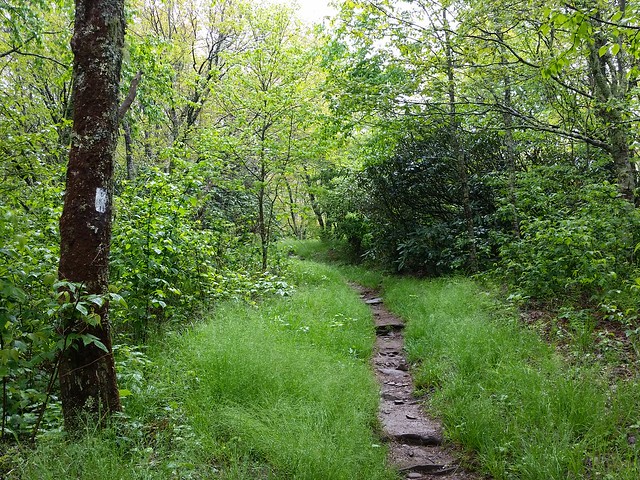 I also found out that the top shelter platforms (where I prefer to be) are not really designed for tall people. One, I kept hitting my knees on the beam every time I bent my legs up. Two, when I was on my stomach sleeping, my feet managed to get wedged in a small space between the platform & the back wall. After the second time I awoke like that I was so tired I didn’t even care.

Had slightest discomfort in right hamstring last night as well. Not enough to take any meds for, but enough to concern me. Here’s hoping it doesn’t come back today, because even though we only have a net gain of 300 feet today, they’re going to be very hard-fought. The elevation profile looked like an EKG readout from a patient in full ventricular fibrillation. Up, down, up down, up, down.

Two shelters we passed today (Russell Field and Spence Field Shelters) were closed to hikers due to nuisance bear “incidents”.  Spence Field was the site of an event just 5 days ago where a bear actually bit a hiker in the leg through his tent. Before I say anything else, I have to mention that the hiker wasn’t practicing proper Leave No Trace.

When I first heard about the incident, my first thought was “he didn’t have all his food hung or something”, because it is NOT in the nature of black bears to out & out attack humans like that. What happened was the hiker had some sort of coconut-scented sunscreen lotion either on his skin or in his tent. Bears in the park are sometimes habituated to associate tents and packs with food, so Mr. Bear most likely bit into the tent thinking it was chomping on a food bag, not a leg. Anyway, Spence Field is closed, and sports an “electric” fence around it. The fence is only for thru hikers who can’t make it the six miles to Derrick Knob. (But what about the out of shape section hikers who can’t make it? We’re people too!). 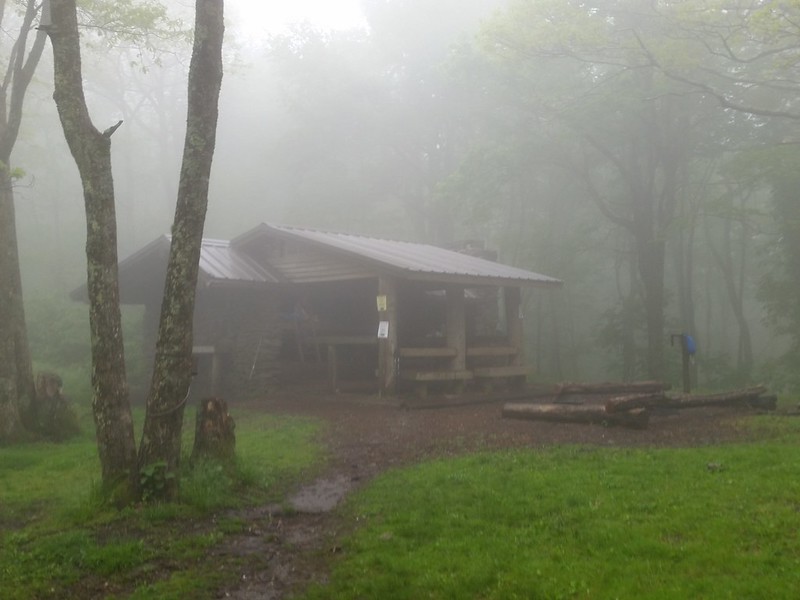 I was the first one up and on trail this morning, and shortly after 0900 I reached Russell Field Shelter ( elev 4348; At mile 180.4/ trip mile 14.1) and stopped for breakfast. There were two thru hikers who had slept there last night, “Delicious” and “Dakini”. They were nice enough, but I didn’t understand why they decided to stop there even though the shelter was closed. Rumor was they would continue hiking after most of the guys stopped for the night so they could get some peace and quiet, but still, Russell Field was closed for a reason. To me, just randomly doing what you want when you want is a good way to get in a jam, but I digress.

This time out I brought along my “cat” stove to try out. It’s basically a Fancy Feast cat food can with holes punched in it that burns Heet (the gas antifreeze) for fuel. I tried it several times at the house and it seemed to work efficiently, but the upside was it’s weight- 0.5 ounces for the stove and 8 ounces for 4 day’s worth of fuel. What I didn’t plan for was the constant breeze blowing the ever-loving shit out of my flame, and even with a foil windscreen, it took me 6+ minutes just to boil water for my coffee, which never makes for a happy camper.

The entire morning was socked in thick fog (when it wasn’t sprinkling or drizzling). The air was cool and damp, but that didn’t ease the climbing whatsoever. My mood soon matched the gloomy conditions as my legs continued to scream from yesterday’s punishment. Walk it off, I thought to myself. Well, what else am I gonna do? Today’s highlights? Spence Field shelter (elev 4916; AT mile 183.2/ trip mile 16.6) , Rocky Top, and Thunderhead. When I came upon the side trail to the Spence Field shelter at 1100 and read the sign about bear alerts and electric fences and shelter closures, I kept going. It was too early to stop to eat again, I was still good on water after topping off at Mollies Ridge, and I couldn’t justify taking the side trip and adding needless miles to my journey. My legs thanked me. 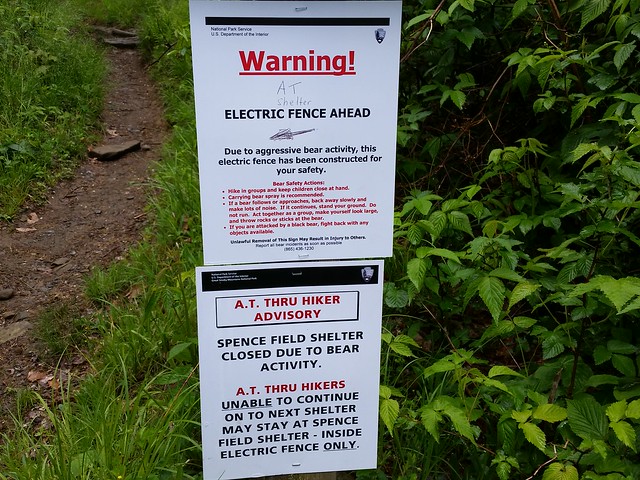 Hikers and fences and bears, oh my!

Yesterday I joked around with the thought of singing the song “Rocky Top” at the top of my lungs when I summitted Rocky Top mountain (elev 5440; AT mile 184.4/ trip mile 18.1), but I was so beat down once I got there, I couldn’t think of anything else except getting my pack off and eating, so I took a well-needed lunch break there. The sun peeked out a few times, and at least I was rewarded with a few slight views of the surrounding Smokies. 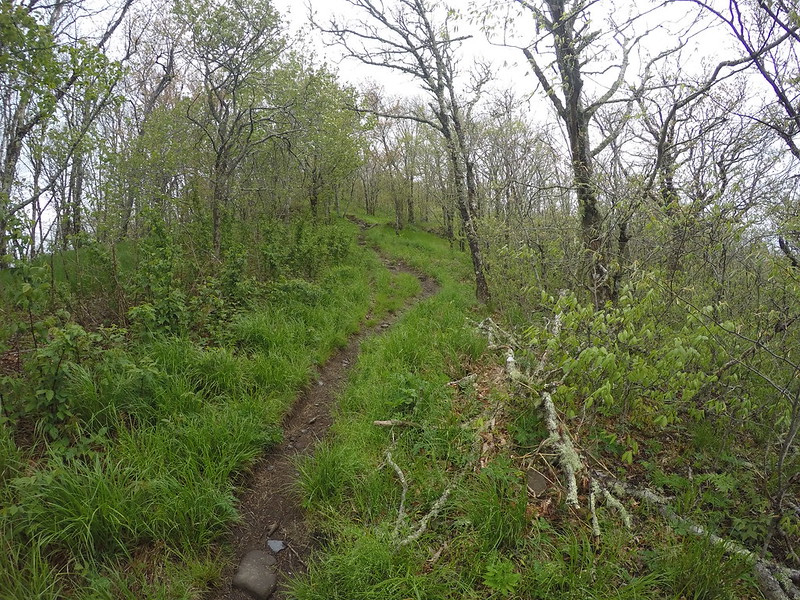 It is a lot steeper than it looks.

From Thunderhead north, the trail only continued to insult me. Where nice, gradual  switchbacks could have been constructed were only arrow-straight paths taking you in the most direct route upwards. On more than one occasion I tried to mentally summon Bob Peoples (legendary trail maintainer) to please appear before me and carve an easier way around this hill.

Fun “Fact”- Legend has it that every time Bob Peoples constructs a switchback, and angel get its wings. Ha!

At one point, the trail drunkenly went up a rocky boulder, and I couldn’t help but laugh at how silly it all seemed. Seriously? Okay then. That’s pretty much how the rest of my day went; my feet ached from being hyper extended and flexed on the severe angles, and my arches were taking a beating from being stretched and stabbed on rocks. I cursed the trail, then the people who constructed the trail with wanton disregard for humans, then I cursed anybody who didn’t seem like they were about to go into cardiac arrest, then I went back to cursing the trail again. Irrational? Yes, but it got me up that damn hill! My speed dropped down to an abysmal 1.4 miles per hour, but at least I was making forward progress. 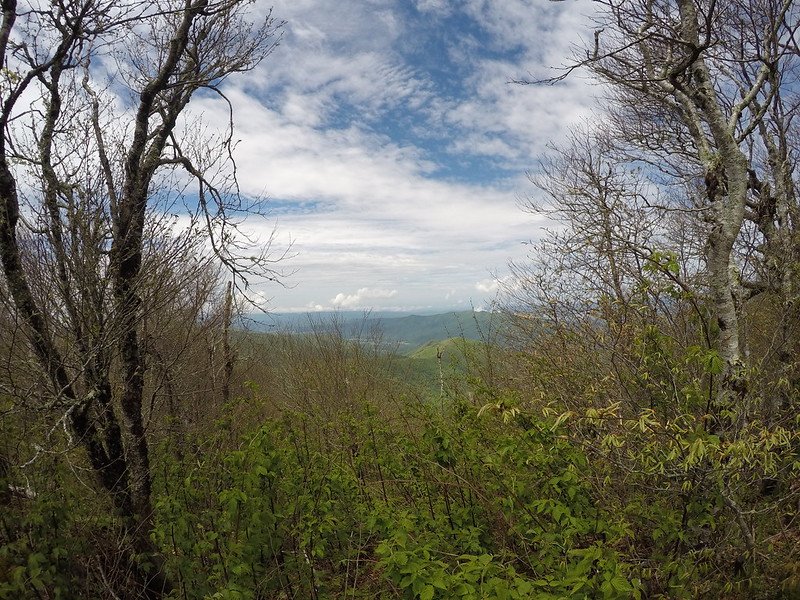 View from near Rocky Top

Later that afternoon, I found Stitch, who had the contents of his Osprey Exos spilling out onto the trail. He showed me how half of the volume of his pack consisted of food, and everything basically was shoved in where it would fit. I grabbed a spot next to him and set the timer on my phone, since it was one of my “mandatory” sit-down-and-take-your-pack-off-and-really-rest kind of stops. We talked about various things, from his painted toenails to the lack of women minorities on the trail. A few jokes were made, then I started complaining about how I was getting my ass pretty much handed to me, and how I was angry at my poor performance. He asked “are you always this mad about random things?” and I concurred. The conversation went on about the various forms of my self-anointed trail name, and eventually, after singing a few lines of an old rap song, the name “Rage” kind of stuck. The rest, as they say, is history.

At 1700 sharp I finished the day’s hike with a final, discourteous ascent up to Derrick Knob shelter (elev 4882; AT mile 189.3/ trip mile 23). Every other time I hike, I’m going downhill to a shelter. So far, every one here is up a hill. There was no shortage of things to complain about I guess. 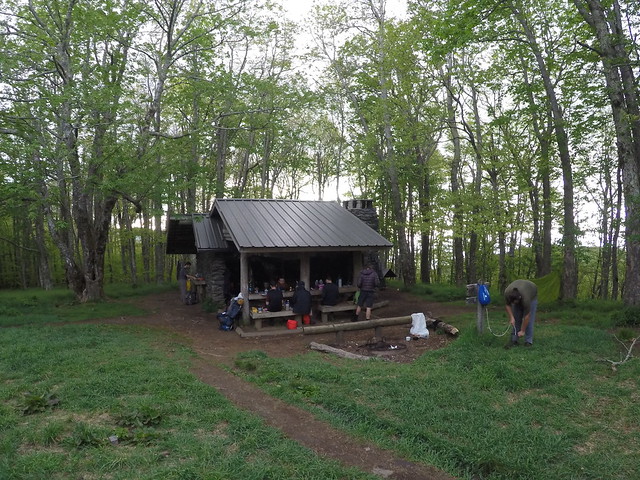 A group of six or seven thru hikers showed up, and something told me it was going to be overflow conditions. Nora & Britches had already saved a spot on the top bunk for me, but after I saw a few guys pitching their tent, I longed for a little privacy and the decent night’s sleep that my tent might offer. Stitch urged me to just go ahead and pitch it, “who’s going to know if you’re a thru or not, the shelter is full regardless, but I insisted on playing by the rules. Not ten minutes later, another thru showed up, and when I asked if he wanted my spot in the shelter, he replied with a resounding “hell yes!”, and I happily set up 20 feet away.

Note: The rules along the AT in the Smokies are that everyone must stay in the shelter and are NOT allowed to set up tents or hammocks. The only exception to the rule is AT thru hikers are allowed to tent/hang if and only if all the available spots in the shelter are full. Derrick Knob has a capacity of 12 people, and there were about 20 folks on site. The rule is in placevto minimize impact on the land, not to separate thrus from section hikers, so it didn’t matter who tented, so long as the shelter was at capacity, so my exchanging a spot with a thru was allowed. 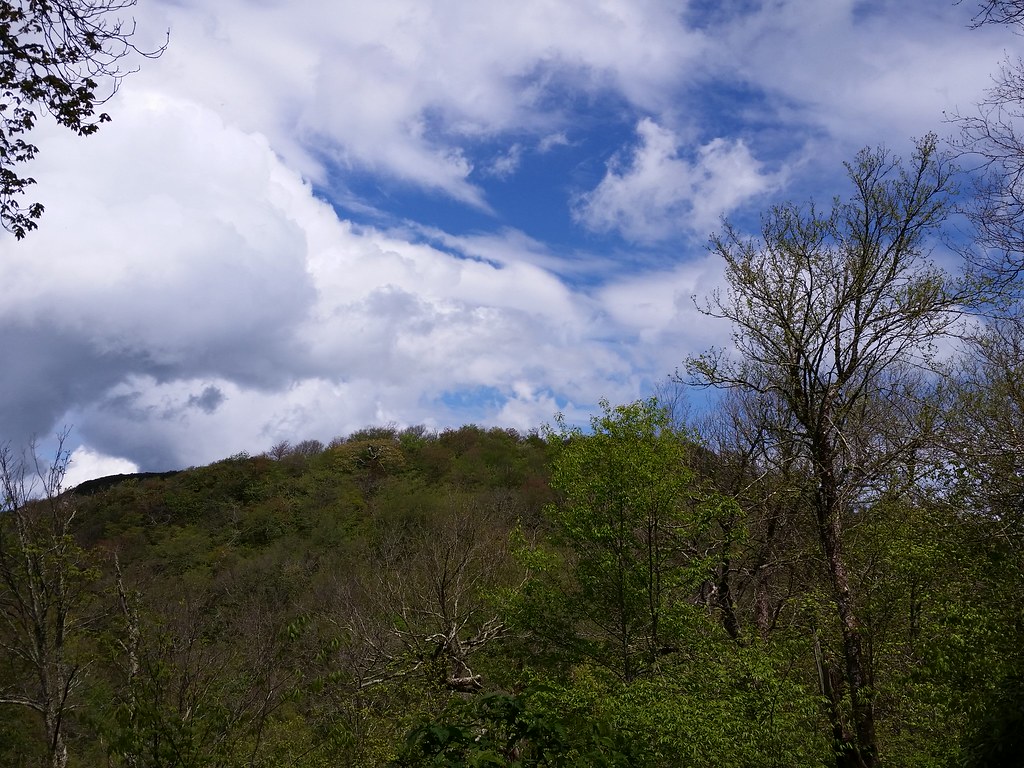 The night ended on a good note- three deer walked right up through the “toilet area” (there is no privy at the shelter), and hung out right behind my tent grazing quietly and ever so peacefully, aware but unafraid of the humans a mere 20 feet away. Harper & I were standing at the side of the shelter watching them when one decided to entertain us by stopping for a quick poop right in front of us. 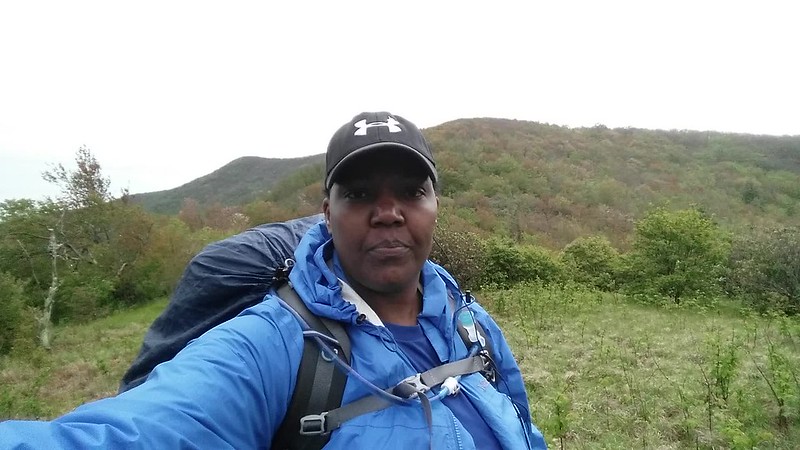