“Remember when life’s path is steep, keep your mind even.”- Horace

-My newest (and longest to date) trek- hiking the Great Smoky Mountains National Park end to end along the Appalachian Trail. All waypoint mileages are measured in the trip miles AND their northbound distance from Springer Mountain.-

There are days when you wake up and just know you’re not going to perform as well as you did the day before. No matter how much you try to not be self-defeating, you just know. This is one of those days where I was going to have to stop, regroup, and reassess my ability to complete what I’d set out to do. The only other time I bailed on a hike was near Erwin after Big Bald kicked my ever-loving ass (read all about it here). In hindsight, I could have finished it, but I’d doubted myself then, and I was doubting myself now. 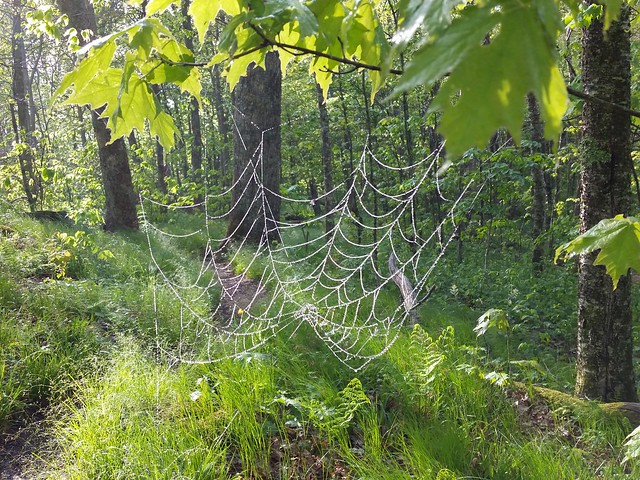 Today’s hike was supposed to be 13.5 miles to Mt Collins Shelter. That wouldn’t be so bad if it weren’t for the last two days absolutely wreaking havoc on my legs & feet. They were killing me. Something else weird happened last night. Right after sunset, what seemed to be an low-flying jet passed overhead. Then it came back. Then there were two of them. Fighter jets? Yes, fighter jets were buzzing around right over our location at Derrick Knob. Now, I’m not one to get upset at military training of any sort; I’m totally accustomed to hearing artillery fire, attack & transport helicopters, and various aircraft flying overhead (due to my proximity to Fort Bragg, NC). But out here where I’m try to find a little solace? Right over the Smokies? Really? That was irritating. I cursed the jets under my breath, and after about 15 minutes of annoyance they went away.

Admittedly, I don’t recall much from the hike today except pain. No amount of using my poles to “massage” my tired muscles (as my physical therapist taught me to do) worked. I was being very careful about how much Motrin I was consuming, but it didn’t work. Stitch commented on my “gangsta limp” when I first emerged out of my tent this morning to retrieve my food bag. “It’s not a gangsta limp, my legs aren’t working right now” I replied. “well, today is a new day with a new purpose.” It is. Today is all about milestones, and that milestone, Clingman’s Dome, was 10.2 miles away.

I set off just after 8. After about 90 minutes, members of the “thru crew” started trickling by. Squatch was first, then Red Beard, then a few others whose names I didn’t recall. The trail rose and fell, rose and fell, with no appreciable gain in elevation, but the saving grace of the morning was a spectacular ridge walk along a narrow spur covered with light green, wavy grass, and what I believe was beech trees (I could be wrong). 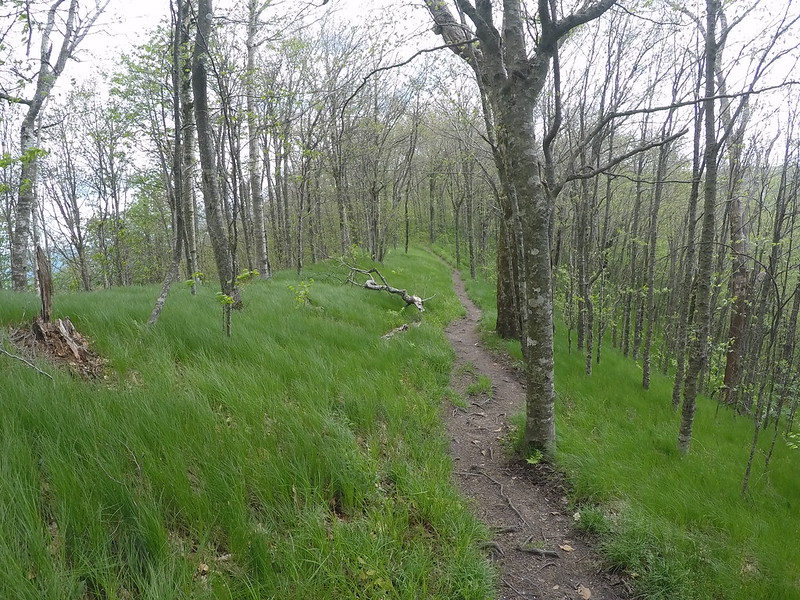 I stopped at Siler’s Bald Shelter (elev 5453 ft; AT mi 195 / trip mi 28.7) for an extended late breakfast/early lunch. Most of the Derrick Knob crew was there, including Stitch, Paul, Nora, and Micah. I made it a point to lay out my Tyvek ground sheet, take off my shoes, and relax as much as possible. Lunch consisted of a Rice Krispies treat, more of the unbelievably messy pepperoni stick, and a smoked chicken salad from Packit Gourmet, which was pretty damn good, but by now I was pretty much forcing food down- my appetite wasn’t there. The other thing about Siler’s Bald shelter was the flies. It seemed like every species of bug with wings had taken flight and migrated there. Clingman’s Dome was 4.5 miles away.

There were some decent views at the actual Siler’s Bald summit (elev 5607 ft; AT mi 195.2 / trip mi 28.9) and a couple of miles later at Jenkins Knob. I pressed on to Double Spring Gap Shelter (elev 5510 ft; AT mi 196.7 / trip mi 30.4), which strangely enough, was less than two miles from Siler’s Bald. Most everyone in my little “bubble” was ahead of me, but I sat around to take in the views, although it was starting to get cloudy and misty. The spruces and firs, after making cameo appearances after Siler’s Bald, were becoming more apparent the higher I went up. 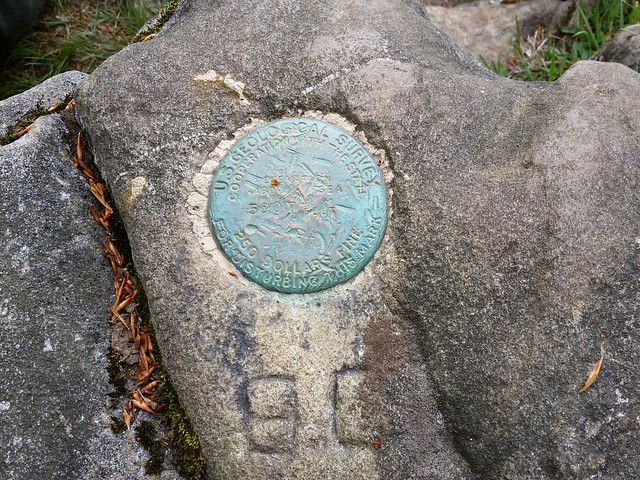 Fun Fact: Siler’s Bald was named for the Siler family, who once grazed cattle on it in the summertime.

I hadn’t been at the shelter long before two deer appeared, quietly munching on leaves and making their way towards the shelter. They saw me, I saw them, but again didn’t seem alarmed, or even concerned, about my being there. It seemed like for the last three days, wildlife migrated towards a shelter after humans had arrived there. Three hikers that I’d leapfrogged with (two from Australia) came up soon after, and we all pretty much hung out watching the wildlife show. There are two springs here (hence the name)- one on the Tennessee side, and one on the North Carolina side. Remember, the AT straddles the NC/TN border most of the way through the park, so ten steps either way put you in a different state. The spring on the NC side was literally 20 yards from the shelter. To be honest, Double Spring Shelter seemed like a very nice place to stay, and as much as I’d liked to have stayed here and called it a very early night, milestones and such. I met an Appalachian Trail Conservancy (ATC) ridgerunner named Maury on the way out. Clingman’s Dome was 2.8 miles away. 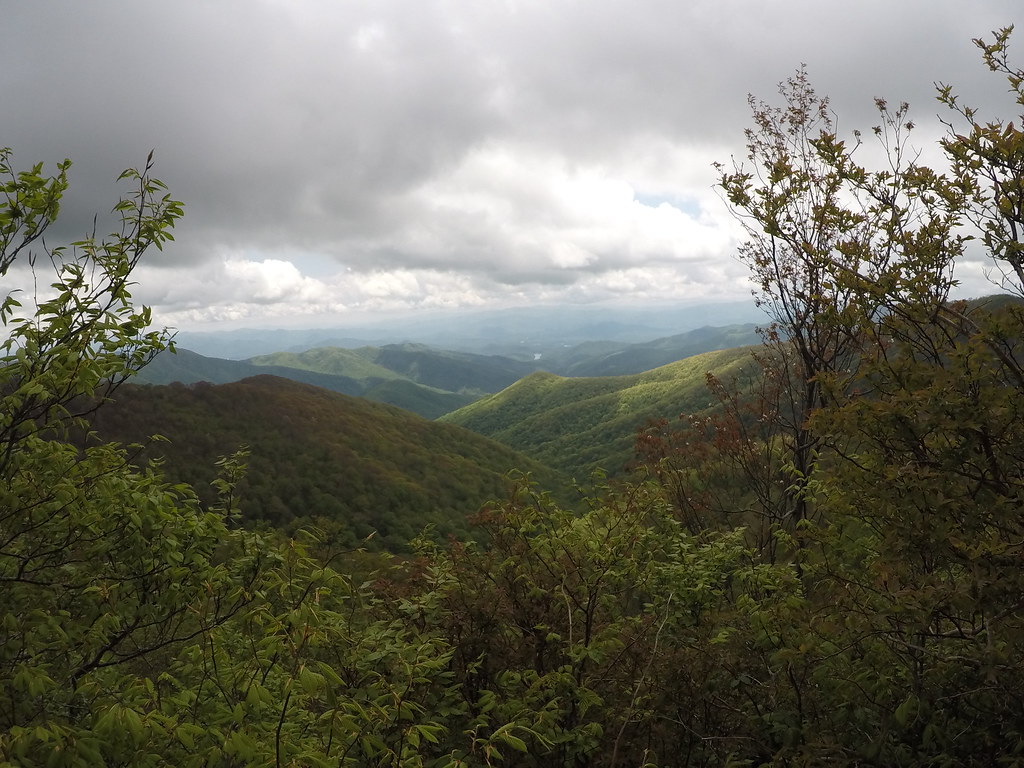 looking down towards Fontana Lake. This is the last “view” I’d get from the AT for the next 3 days!

When I got to the intersection of the AT and the Clingman’s Dome side trail, the three hikers I’d met before caught up to me. Two of them were from Australia, and the third was their “guide”, a guy named Mark. They were ending their hike from the NOC (Nantahala Outdoors Center- about 30 miles south of Fontana Dam). I knew I wasn’t going to go further, so I went out on a limb and asked them how they were getting back to Gatlinburg. Mark said they had a shuttle arranged for a 6pm pick up, and offered a ride down to my rental at Newfound Gap, as long as the driver had room for the four of us.

I mounted my Go Pro on my head strap in an attempt to capture the “magic” atop Clingman’s, but because I had the waterproof housing on mostly all you could hear was my heartbeat and pulse pounding. It was sprinkling intermittently, and the closer I got to the top, the more it came down. Since I had some time to kill, I walked about a mile further down past the tower where the Mountains to Sea Trail began, then doubled back. As if to spite me one final time, as soon as I climbed the paved walkway and reached the top of the observation tower at Clingman’s Dome (elev 6667 ft; AT mi 199.5 / trip mi 33.2), it was raining. There was nothing to see. At that point, I didn’t even care. I was heading to Gatlinburg.

Sweet view from the top!

Fun Fact: The Mountains-to-Sea Trail (MST) is a long distance trail in North Carolina the begins at Clingman’s Dome and goes eastward to the NC coast.

Thankfully when Mark’s shuttle arrived, he had a Ford Expedition, so I got a ride down to Newfound Gap, which is a good thing, because none of the tourists would give me a ride down, and there was no way I was making that walk. I went back down to Gatlinburg, trying to formulate a plan for tomorrow, but the only thing on my mind was rest and recovery. I got a room at the Travelodge again, this time a much cleaner one, laid my things out to dry, showered, and hit Howard’s Steakhouse for a pretty damn good steakburger and fries. On the way back, I stopped at Old Dad’s General Store again to pick up some Motrin and a couple of beers to help me sleep. Once back at the hotel I elevated my feet and called it a night. 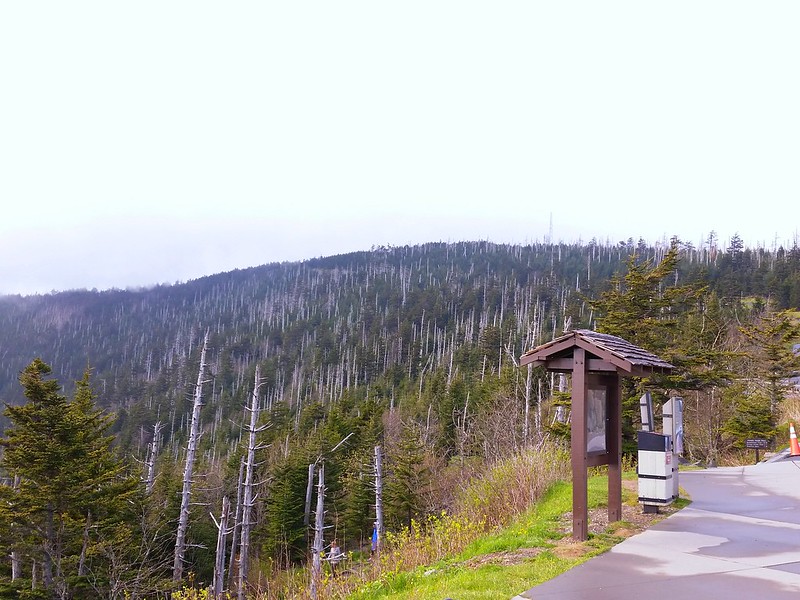 Looking up towards Clingman’s Dome from the parking lot. You can see the white stalks of the dead Frasier firs. 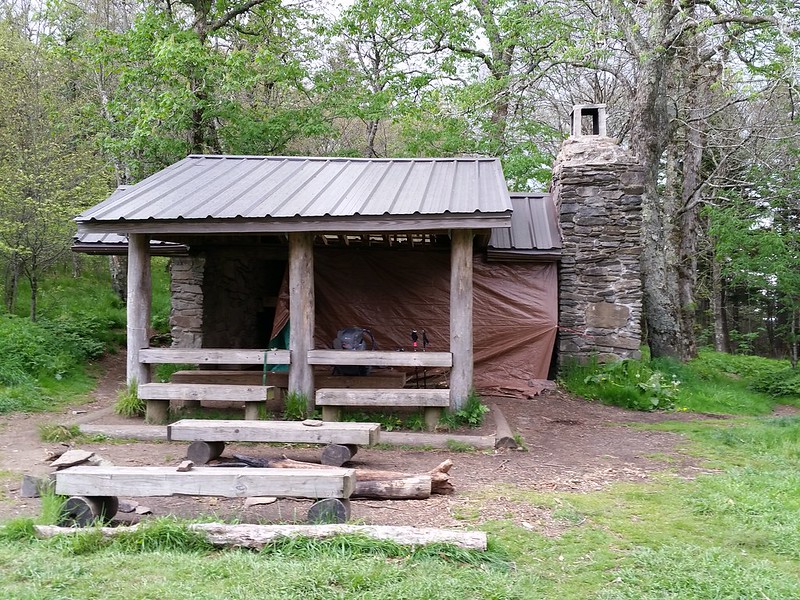