Somehow I lost my notes, so here goes my trip report from memory.

It rained on & off this morning as everyone was getting up & situated to leave. Jen & Curt were heading NOBO towards Whitetop. I had thought about going north too, to cut off the chunk of AT I hadn’t hit yet, but that would entail another night’s stay, and I was running low on food. I didn’t want to chance it.

Skink & his nephew headed SOBO back to Damascus. I told him I’d link up with him for lodging once in town.

Not wanting to get wet again, I procrastinated at the shelter, conversing with the hammock guy with the crazy, curly blond hair. His trail name was Nightwalker. He told me how he had a total knee replacement last year, showed me the scar, and said when he started the trail this year he was only doing about 5 miles per day. He must have seen the look on my face, indicating that he’d never make it to Katahdin before OCT 15, because he quickly added- “I’m going to Harper’s Ferry, then flip-flopping up to Katahdin”. Ahh, there ya go.

We chatted about mundane things (remember I really didn’t want to walk in the rain). One thing that caught me off guard was when he asked about what kind of music I listened to. He said he likes rap, but not the new stuff out today, “except for Kendrick Lamar. He’s good”. Umm, what? He then floored me. “My favorite rapper is Tek-9”. Excuse me? Holy crap, never in a MILLION years would I have thought this guy to like rap. Gangsta rap. Goes to show you- never, EVER judge a book by its cover! The trail does that; shows you how cool some people can really be.

Time was ticking by so at 0845 I said goodbye and good luck and headed back down the trail. I gave the first white blaze I came upon the usual “high five”. It was very damp- rhododendron leaves were still sporting raindrops from the intermittent showers.  After crossing over a narrow, rocky ridge, I was treated to a tiny clearing that had a quick view of the surrounding hills. Did I mention that from the time I left the shelter, my phone was searching for a GPS signal? I must have gone about 2 miles before it locked on to the satellites.

Shortly after 1100, I came to the AT/VA Creeper Trail overlap. Here I was going to leave the rocky, rooty, undulating Appalachian Trail for the cinder-covered, easily graded, hard-packed ground of the Creeper. From the looks of things, there was at least 9 miles of trail ahead. Let’s go. 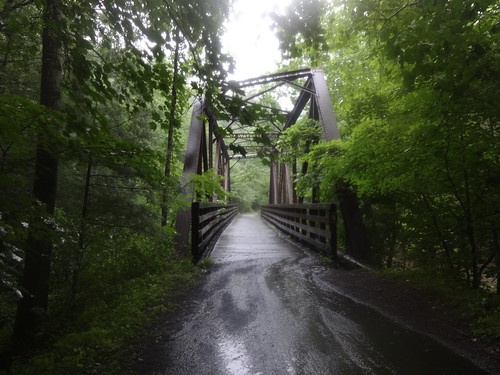 I passed over a couple trestles, listening to the slight roar of the swollen Whitetop Laurel Creek. The water was muddy and murky from the downpour last night. The AT left the Creeper Trail and dipped off into the woods. I kept on trucking. All along the Creeper were massive rock walls towering above, and fishing sites along the creek. There are benches every so often on the Creeper, and I stopped at one for a quick sit down & snack- wasn’t ready for lunch just yet. I’m glad I didn’t eat a lot. I started seeing signs of civilization- not Damascus, but little pockets of homes along the trail, as well as mini-eateries. Hey Joe’s was one, and Little Cabin on the Trail was another. Joe’s didn’t seem to be open, neither did the Ice Cream stand. A little further down was Taylor’s Valley, which had a diner called “The Creeper trail Cafe”. Yep- here’s where I’m having lunch. Hope they like hikers because I’m not exactly smelling like roses. 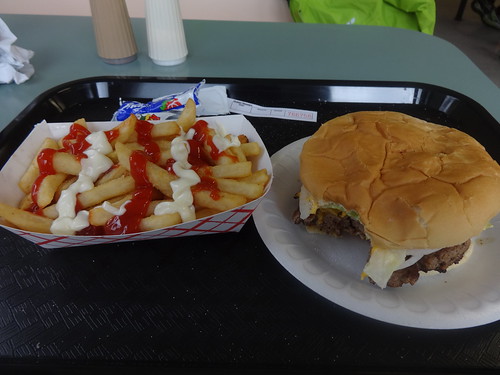 The cool air was a shock to my body- my shirt was damp from a mixture of sweat and humidity and a sprinkling of rain. Bluegrass music was playing and I ordered a simple cheeseburger & fries with a Welch’s Grape soda, which I managed to spill all over my rain jacket. Geez. The food was good though- hit the spot just right. Fully satiated but realizing I still had miles to go (and I’m not on two wheels like most others in the place), I got going again. Rain jacket went back on, and not too long after I passed the intersection with Straight Branch (where I had started this section) came a rumble of thunder.

No, please don’t let there be a thunderstorm brewing while I’m out here.

Damascus was less than three miles away. A sheet of lightning flashed and thunder rumbled again, this time a little louder. DAMN. I picked up my pace as much as I could without breaking out into a run.

FLASH! BOOM! A bright bolt of lightning somewhere up ahead struck and simultaneously came the crack of thunder. I gasped and chucked my poles away, about ten feet in front of me. The rain came down heavily, pelting me as I crouched down on the balls of my feet as best as I could. My knees are BAD so the crouch turned into a hybrid three-point stance of sorts. “I can’t stay here forever, screw it”. I’m getting soaked so I may as well HIKE. I was going to walk like a champion into town, even if I looked like a half-drowned rat.

It stopped raining a mile out. 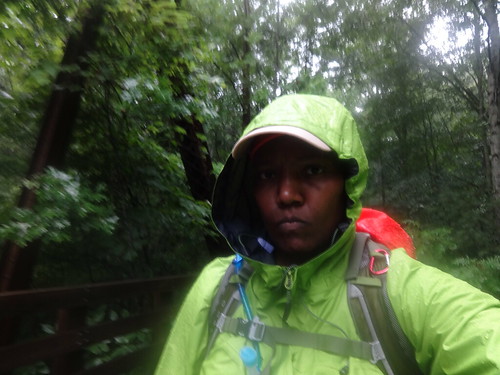 With renewed vigor, I reached my truck and sat on the tailgate, drying my feet, my hair, and changed my shoes. For some reason, I went back to Mount Rogers Outfitters again. Again, the AC chilled me once inside. I browsed around the store and saw *gasp* ULA backpacks in stock! I asked a girl at the counter if she knew much about them & she deferred me to Jeff, who was walking around the store behind me while on the phone. Does he think I’m stealing? Is that why he’s following me?

Once he got off the phone, the old Damascus charm was turned on. He got me fitted for a ULA Catalyst (couldn’t decide between that and the Circuit). When I asked how much for the ensemble (waistband included) I wasn’t really planning on buying one right then; keyword wasn’t. He looked at me & said, “You know what, since you’re military & all, I’ll give you a pretty good discount.” I won’t reveal how much he quoted, but it was enough for me to say “sold”. Jeff even threw in a free ULA raincover.

Once I left MRO I drove around looking for Skink’s place, the Hiker’s Inn. Not sure why I drove- it was a two minute walk right up the street! Paul (Skink) came to the door and said “You finally made it! I was wondering where you were”. I told him about my stops at the cafe and MRO. Their house serves as a B&B, and the hostel is in a building right behind. It has a 4-bed bunkroom, a separate queen room, a bathroom, and a small hallway connecting the two, complete with a coffeepot, small fridge, and shelves with towels and scrubs (for hikers to wear wile doing laundry- pretty cool of him to think about that). An older gentleman was already in the bunkroom and again, I wanted privacy, so I opted for the queen room.

I walked to the Blue Blaze Cafe, and got myself a beer & a calzone that could have fed three people. the guy at the hostel warned me they were huge. A guy was at the bar and after we talked for a while, he said the next round was on him. We went through three when I realized that it was close to closing time. “Relax, don’t worry. We’ll stay open until you guys are done”. Whoa, talk about hospitality. A couple came in about 15 min before closing time and the staff graciously stayed open & fixed their food. Can’t beat small town charm. I went to the grocery store for no other reason than to spend money unnecessarily. They had the “create your six pack” deal, so I got a few microbrews to take back with me. Time to pop a Tramadol and say goodnight. 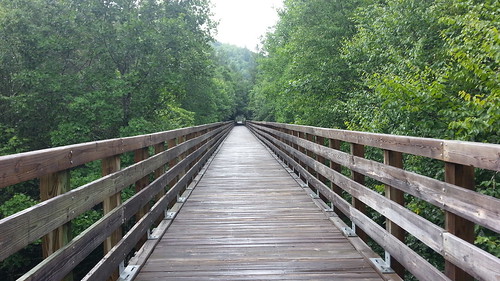 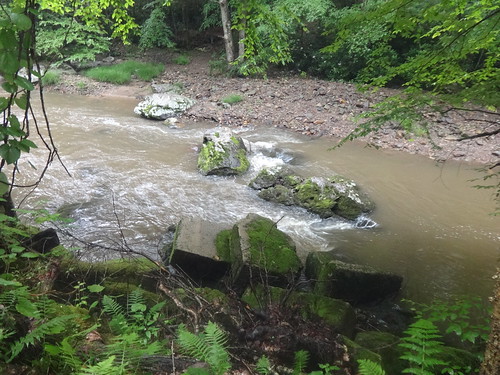