“Discoveries are often made by not following instructions, by going off the main road, by trying the untried.” 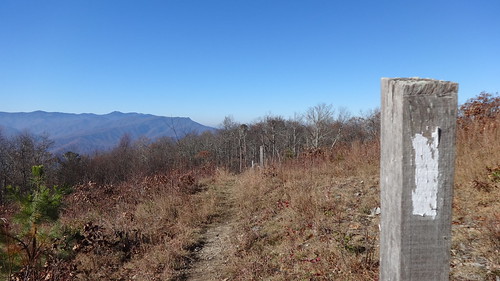 Didn’t sleep too bad last night; I guess the cloud cover was just enough to keep the chill away a little. Awoke around 8 and dawdled breaking camp down, no rush since Kelly wasn’t due to meet me at  Exit 451 off of I-40 until around 2. Went back up to the FAA radio tower and took in the sights, snapping a few more pictures, then headed back down Snowbird. When I say headed back down, I mean meandered. Was in absolutley no rush, as there was no need to risk a last-minute spill down the mountainside.

Navigated some of the stupid blowdowns again, but at least I had figured out how to best negotiate them from yesterday. I thought it would be a good idea to mark the bad areas on my GPS and let the folks at the Carolina Mountain Club know about them. 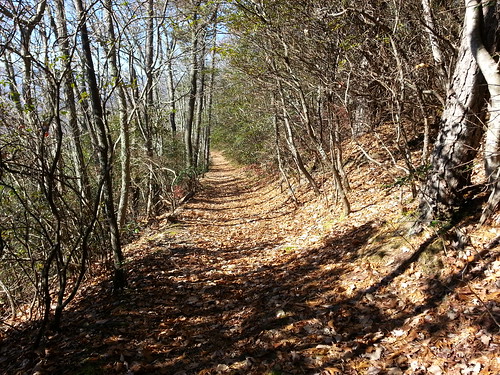 Heading down from Spanish Oak Gap

I stopped by Painter Branch again to get some water, and as I was getting myself saddled back up I heard a loud rustling noise, like a large mammal was coming down the trail. I stiffened up abruptly, and then breathed a sigh of relief when the cause of the noise was in fact not a black bear, but a group of 4 southbounders loping downhill. They stopped for a quick break and we made our introductions. They were two men, Human Torch and another guy whose name I forgot, and two women, Faith and… damnit I need to start writing these down! Sorry. 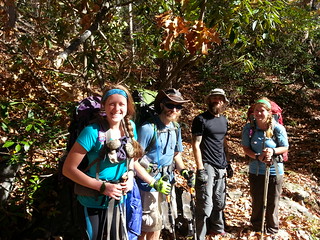 Anyway, I offered them the rest of my jerky since my hike was done and they were heading into the ever-loving Smokies. We talked about stopping by Standing Bear. I definitely wanted to check that place out. One of them took a smoke break ,while the rest of us headed off. Well, THEY headed off, I just kind of followed. No way in hell was I going to keep up with them, even downhill, even if I threw my pack off and started running. Of course, it wasn’t long before the smoke break guy whizzed past me as well. Such as it is, being a weekend section hiker.

At a clearing under some powerlines, I saw a text from Kelly. I called her and she said that she’d forgotten we were in Central time, not Eastern time, so she was running an hour behind. Also, that she was late getting the kids up & out to breakfast so she was actually TWO hours behind schedule. “No problem” I answered, “I’ll just hang out at the hostel a little while longer”. 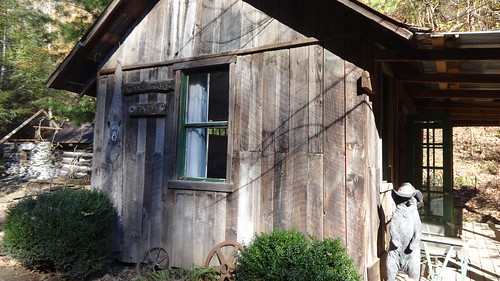 The Standing Bear Farm cabin, with a standing bear of course!

Once I came down the hill, instead of crossing the gravel road and heading back up the trail, I hooked a right and started up towards Standing Bear. It wasn’t more than .2 miles up the road, but was steep enough to remind my hamstrings what they’d done yesterday. The hostel is actually a group of cabins and out-buildings, with the main house back a little further.

There’s a cabin, a bunkhouse, a laundry area, kitchen building, and a bunch of other cool little things. Definitely not your run of the mill farmstead. I dropped my pack outside the bunkhouse and sat down for a spell. That’s when this guy with long flowing blond hair came up. He had a cigarette in one hand and a plastic tumbler in the other. “Hey how’s it going?” he offered. 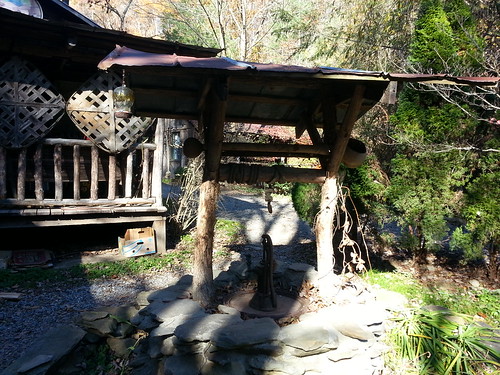 “You must be Rocket” I said, smiling. “Yep, that’s me, how’d you guess?” “Oh man, you’re famous. Internet famous”, I replied. We had a laugh. He took me around on a grand tour of the grounds. They have a treehouse there. A literal treehouse you can sleep in. How cool is that? He took me behind the main house where the owners (Curtis & Maria) live, and showed me another one-room outbuilding that Curtis was turning into a single room with a nice view of a pasture. The whole place was bucolic, if not a bit kitschy.

Rocket and I talked about everything under the sun; his service in the US Marines, my current service in the US Army, beer, hiking, mountains, how crazy it gets in the springtime. He said at one point earlier this year he had 40 people TENTING along the grounds- the cabin, bunkhouse, & treehouse were all jam packed. I don’t think I’d want to be around all that craziness, especially having to share an outhouse… 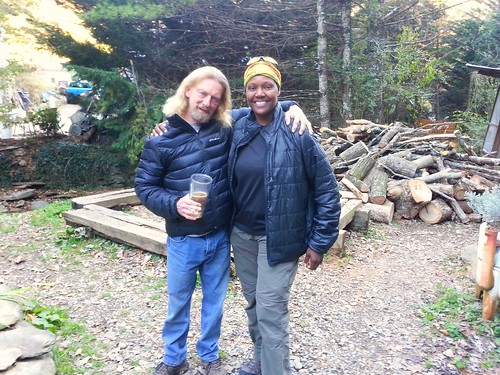 Maria came into the bunkhouse with a load of fresh blankets and I told her what a cool place this was. I saw Curtis going between the house and the little “store” but didn’t get a chance to meet him- Rocket said he’d be holed up in the house soon watching a football game. I sat around shooting the breeze with Rocket, a guy who lives up the road who came down to visit, & the 4 SOBOs for a couple hours. There was another hiker who was crashed out in the treehouse, but he eventually came down to get some food.

Once the sun ducked down behind the mountain, the temps took a nosedive, enough for me to throw my Revelcloud jacket on, and zipped all the way up. I kicked my feet up for a little while longer, long enough to make note that Rocket loves him some Jim Beam, and donated the rest of my non-perishable food to the other hikers, who were going to try to make it past Davenport Gap Shelter to Cosby Knob. Of course, the suggestion was made that they rest their weary legs for the night. Shotrly thereafter, I got the text from Kelly saying she was passing by Newport, TN, which would be around 30 minutes out, so I bid farewell to Rocket (man) and started down the gravel road to the exit. (No need to head BACK up on the AT- I’d already done that section coming up and the blowdowns were irritating). 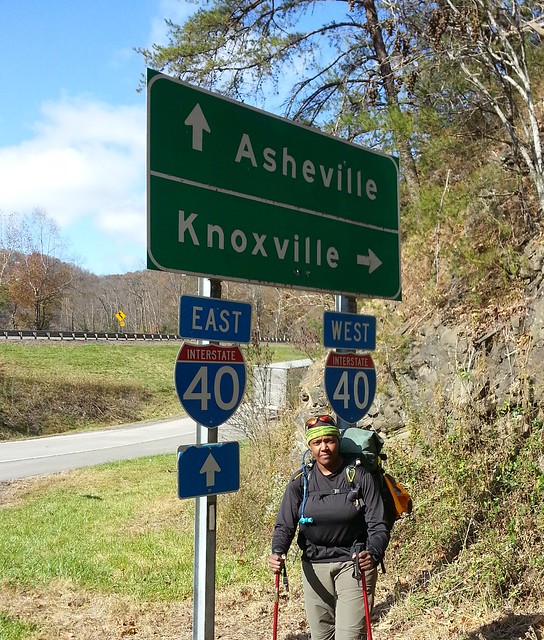 As soon as I got rounded the bend, I saw a white car pull up. It was Kelly, and talk about perfect timing! That’s when I realized the deal we made- I had to drive the other 5 hours back home. I was tired, but had an enjoyable hike.