“In the mountains there are only two grades: You can either do it, or you can’t.” – Rusty Baille

BRRRRR! Last night was cold. I woke up several times shivering. The fire we made had died out around 10. My brand new Primaloft-filled jacket was balled up under my head as a makeshift pillow, but can you believe I didn’t want to have to unzip my sleeping bag just to put it on? I’d just tense up all the muscles in my body a few times, and fall back asleep, grateful that I didn’t have to go pee. That’s how cold I was.

Anyway, up and at ’em. I made my coffee and paid the obligatory visit to the nasty “toilet area” up on a hill to the west of the shelter, bid farewell to my shelter-mate Night Owl and set off NOBO, retracing my steps. Destination, Snowbird Mountain (or further, who knows?) Once reaching the stupid tangle-o-rama from that almost ripped off my ankle yesterday, I decided to bushwhack 30 feet around the disaster area instead of trying to navigate through it again. Coming down the wooden steps back down toward the bridge, the box of trail magic was still there.

Keeping true to my promise, I perused over its contents and decided for a chocolate chip cookie, signed the register in appreciation, and set off on my merry way. That cookie was good, although my body wasn’t accustomed to having sugar (I’d been on the ketogenic diet for over a month now) and 10 minutes after finishing it, a wave of pure sugar high washed over me, soon followed by a headache. Well, that’s human physiology for you. I’d carry that headache for the next few hours. 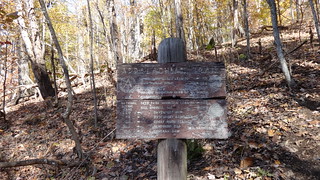 Once back under Interstate 40 where my trip started, the trail goes up a long wooden staircase, then meanders around the side of a hill before it drops down to cross Green Corner Road. Now, I could have saved myself a lot of effort and cursing had I just taken the road up from the Interstate exit, but being the purist I am, I didn’t want to skip any white blazes.Trees were down everywhere. Man, it was like going through an obstacle course. To make matters worse, many of them were right where the trail cut across a steep slope, so maneuvering around them meant climbing up-slope, not an easy feat with 30 pounds on your back.

You could tell that Standing Bear Hostel was close by; there was quite the bit of racket down by the road with chainsaws buzzing. Just up from the road was a rock painted with the hostel’s logo in bright orange, and a sign on the back of an AT marker said “Go back to Standing Bear”. Was that an order? Did someone not want me out here? Stop being ridiculous and keep it moving.

More trees down. More climbing over, under, and around them. Some were large trees whose trunks crashed downhill over the trail, blocking the way. Those were easy to navigate. Just throw a leg over, put your butt down, and slide down bringing your other leg over. Some I had to crawl underneath on my hands and knees. Two of them required me to take my pack off, hook my foot through a shoulder strap, and drag it under behind me. The hard part was when the top of the tree (or trees) came down over the trail. Branches and limbs and leaves blocking your view of the ground made it especially hard to navigate. One rather large section of rhododendron was down as well. I remember crawling on all fours through about 20 feet of that. Fun times! 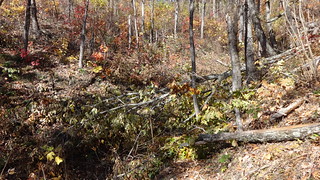 The trail is in here somewhere…

I stopped at a creek called Painter Branch (mi 242.9, elev 2,893′) for a late lunch around 1330. It was a pretty cool looking area where you actually crossed over the creek to get to the campsite, tucked in a draw between two hills.

Fun Fact: “Painter” is actually an Appalachian pronunciation of the word “panther” (otherwise known as a mountain lion). This once widespread predator was hunted to near extinction, but is making a comeback, although not scientifically certified to be in habitat along the Appalachian Trail.

Although the sun was out and I’d built up quite a bit of body heat from the obstacle course, it was still chilly enough to throw my jacket back on. I had gone to the REI in Cary, NC right before the trip for the sole purpose of getting a synthetic fill jacket. My heart was set on a North Face Thermoball. Unfortunately, the North Face jacket was a little too snug around my derriere (go figure) and the sleeves were too short when I raised my arms overhead. The Patagonia Nano Puff fit a little better, but my size (XL) only came in a bright red (I wanted black). The salesperson mentioned the REI Revelcloud, which I knew was going to be heavier, but the fit was almost perfect and it seemed to be a little more windproof than the Thermoball. At $50 cheaper, the jacket made sense, and I was happy with it.

Right as I stated back up the trail a female hiker was coming down. We both mentioned that blowdown were in both directions. She was right. Right up from Painter Branch the trail opened up to an area where random trees were scattered all about. The combination of leaves on the ground and limbs all over the place made it just about impossible to see where the trail ran. More than likely a tree or two that bore the white blaze marking the way was probably laying on its side.

I couldn’t do much but follow a dry creek bed hoping it was the right way to the top of the hill in front of me- it seemed a little more walked upon. I looked behind me and to the left scouting out where the trail could possibly be, then it hit me. Duh, you have an app on your phone that shows you where the trail is, dummy. Oh yeah. I was going the right way.

Up a little further the trail went through a large stand of beautiful oak trees, a sweet rhododendron tunnel (I love walking through those) and meandered up to a campsite at Spanish Oak Gap (mi 243.8, elev 3,489′). This seemed like a good place to camp if I decided against staying up on the summit, however, it was situated just like my very first overnight campsite on the AT ever at the Pig Farm campsite near McAfee Knob. I remember how the  wind blew straight through a valley onto the exposed ridgeline, and I wasn’t sure I wanted to deal with that again. We’ll see what the top of Snowbird has to offer. 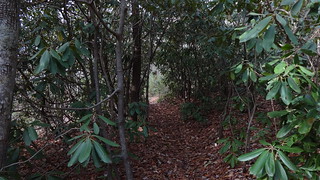 The trail met up with an old woods road apparently for official vehicular access to Snowbird, which has an FAA tower at the top. A couple was coming down the hill and after noticing the “I’m getting fatigued” look on my face said that I didn’t have much longer to go to the top. At least the wide road made the going much easier. At a quarter after three I finally emerged at the top of Snowbird Mountain (mi 245.2, elev 4,263′). That was a 2700 foot climb over 5 miles. 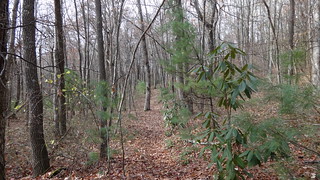 The skies were overcast but visibility was good. I hooked a left onto the side trail that went up the the FAA VORTAC array, set my pack down, and took in the scenery, looking at the topographic map on my phone for reference points. There was a gravel road that circumnavigated the tower, so you quite literally got a 360 degree view since any brush or vegetation of moderate height was cleared. 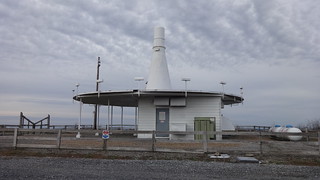 The FAA array on top of Snowbird

Fun Fact: A VORTAC is a navigational aid for aircraft pilots consisting of a co-located VHF omnidirectional range (VOR) beacon and a tactical air navigation system (TACAN) beacon. Both types of beacons provide pilots azimuth information, but the VOR system is generally used by civil aircraft and the TACAN system by military aircraft.

The view was amazing. There were countless mountain peaks all around, and although I tried, I just couldn’t identify them. There was one summit in particular that I knew had to be visible from here, and that was Max Patch. Once I oriented my Backcountry Navigator topo map towards Hot Springs, lo and behold the open, grassy, bald head of Max Patch was peeking out through the branches. 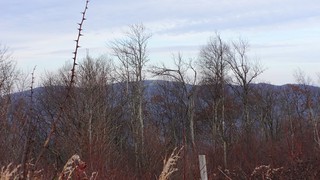 Max Patch is just visible through the branches

According to the guidebook, Groundhog Creek shelter was 2.5 miles away, and after wasting 30 minutes of precious daylight, it was time to make the call: stay up here on the summit, walk another half mile northbound and camp out in the sag, or go back down to Spanish Oak Gap and cut some miles off the walk tomorrow. Eh, I had enough water to make it through the night so I figured I’d stay put.

There was a campsite with a nice, high fire ring and two big logs to sit on just down from the tower. The previous tenants were kind enough to leave some firewood and I set out to gather some kindling. Two nights in a row on the trail with fire? Let’s try it! There was a swath of freshly cut brush between the campsite and the tower, and it warmed me up quite a bit going back and forth, first collecting sticks the width of pencils and the width of my thumbs for kindling, then bigger sticks the width of my forearm to get the blaze going. Got the wood laid out, set up my tent and started on the task of making fire. There were a few patches if dried grass I used as tinder (along with a piece of my Solkoa cube- I need all the help I can get). Wouldn’t you know, I got a sweet blaze going. I made fire! Yes! 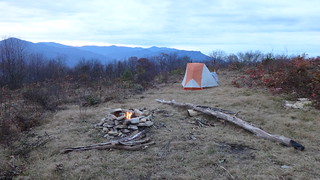 As the sun set I looked down in the valley below and saw tiny red lights. What is that? The red lights were moving, then I saw white lights coming towards me. A lot of them. Ha- that’s Interstate 40! How crazy is it that just when I thought I was as far away from civilization as I could be at the top of this remote mountain, all I had to do was look down. The overcast skies kept the temperatures from falling too much, and I settled in for a good night’s rest. 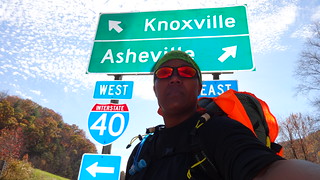 Crossing under I-40, again