“It’s an interesting combination: Having a great fear of being alone, and having a desperate need for solitude and the solitary experience. That’s always been a tug of war for me.” – Jodie Foster

For some strange reason, I kept missing the entrance to the famed Uncle Johnny’s Nolichucky Hostel. I mean, I found the buildings, parked, walked around and found the bathroom,  but I kept missing the actual entrance so I could catch my shuttle. Oh- it was a little walkway obscured between two towering bushes that led to a patio where a few older gentlemen were. THAT was where I needed to be.

My driver got me to Devil Fork Gap (mi 309, elev 3115′) at around 1330. It was sunny and 71 degrees- not bad at all for a hike. The forecast called for a 30% chance of rain each day until Sunday, and it had just rained two days prior, so chances were the springs would be flowing freely. For some reason however, I decided to bring an extra water bottle, my down sleeping bag, a long-sleeved shirt, and a few other things I hadn’t brought along on my last hike. Although they were small and didn’t weigh much individually, that brought my pack weight (including 3 1/2 days of food) to 27 pounds- almost 4 pounds heavier than my Hot Springs hike- and THAT wasn’t factoring in water weight. Hmm. 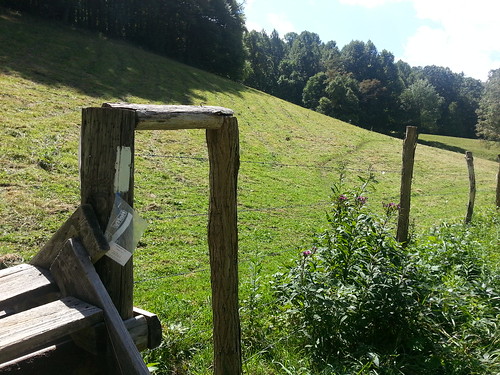 The trail initially wound SOBO uphill through a meadow, then up a relatively easy climb up to a ridgeline where a timber operation of some sort was going on. What I’d initially thought were people out riding ATVs was actually the sounds of the logging machinery going to work on the trees. A mile or so up a couple was headed downhill and said that there indeed was timber harvesting going on, and to be careful, but none of the trees fell on the trail.Little did I know they’d be the last human contact I’d have for a full 24 hours. 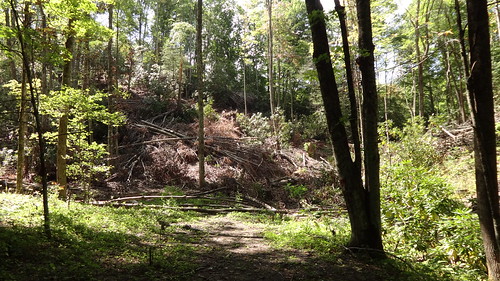 I came out to a scrubby clearing that overlooked Interstate 26 back to the east. The guidebook said there would be a couple of places where the trail would overlook the highway, since it paralleled I-26 until just before Hogback Ridge, and then they’d intersect at Sams Gap. This time around I wanted to match up my photos with my GPS location AND azimuth (so I knew exactly what summits and ridges I was taking pictures of), so the break at this meadow ended up being about 30 minutes of me snapping photos, taking screenshots, and looking at  my map. There was a good stretch of clearing where massive cuts, dynamited out of the mountain leaving an exposed rock face where I-26 ran through, were quite visible. Let me tell you, driving up that Interstate was beautiful, but you don’t really get the scope of how much effort went into building it until you see it from above. 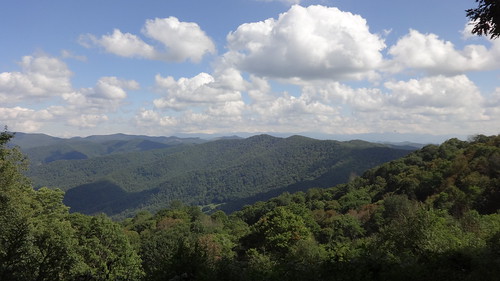 Buckeyes and acorns (and who knows what else) were falling off the trees, and it took me a while to get accustomed to the sound, then I started wondering if one was going to fall and smack me in the head and knock me out. That’s the sort of silliness you think about when you’re all alone in the woods and have nothing to do but walk and think and let your mind wander. Not “Did I leave the coffee pot on?” but “Is an acorn going to kill me? Will a bear try to get in my tent tonight?”

There was another vista near Frozen Knob (mi 312.2, elev 4541′) that overlooked I-26 near Sams Gap, a major trailhead serviced by US Route 23. One of my other hobbies is taking time-lapse road videos, speeding them up, setting them to music, and adding interesting notes and facts about the roadway and surrounding areas- we call it being a “roadgeek”, so getting to see the highway I’d recently traveled to get here from a different perspective captivated me. Alas, the onslaught of the cursed spider webs that continually assaulted my face snapped me back into reality. Coming up Hogback Mountain was when my leg finally decided it had enough already and let me know with a little twinge in my left knee. Naturally, that’s when the trail developed a nice little stair-step that had to be negotiated on tiptoes.

Arrived at the Hogback Ridge Shelter (mi 315, elev 3342′) at 5 pm exactly. There were bear cables directly in front of the shelter, and I set out to top off with water for the night. The spring was flowing extremely well, but it was a 400 meter walk from the shelter. Along the way were some nice, well-hidden campsites. At least the trail to the water wasn’t straight up and down like they normally are. It took me a while to situate my tent- the ground wasn’t exactly flat ANYWHERE, so I was left with choosing the lesser degree of slant. 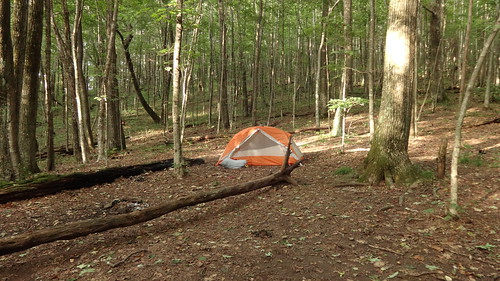 Little hairy white caterpillar looking things kept crawling on my pack. I don’t know what they were but I didn’t want to touch them. Dinner was MRE Chicken and Noodles with some Texas Pete hot sauce, which was muy delicioso. Mmmm. I went to clean my hands but couldn’t find the hand sanitizer. I searched all over for it but couldn’t find any OR my wet wipes.
Did I freaking forget to bring hand sanitizer? How the hell am I supposed to keep my hands clean? Damnit now I’m going to get norovirus or salmonella poisoning or E. coli or some other horrendous infection.
Of course, there was also the mandatory trip to the privy that had to be made. FYI, I still haven’t, let’s just say, REALLY used a privy to its full potential. Sorry, I just haven’t had that…urge to go. This one was tricky, one of the boards in front was missing so if you stepped too far in, you would actually step IN something. Needless to say, my balancing act was perfection. 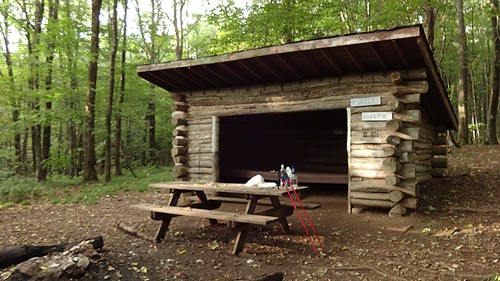 I happened to find my antibacterial wipes, so maybe I won’t get E coli tonight. Made a little entry in the register, but had to use the pen in the shelter (germs) because I couldn’t find the one I thought I packed. There’s definitely a pattern of failure forming here. One hiker mentioned that a mouse apparently got into his backpack, and had babies in it (!). Uhh yeah, I can do without that, thank you very much. Anyone hiking the AT must take a few minutes to read the shelter registers whenever they stop- there are some true comedians and characters out here on the trail. Also, someone apparently emptied out their first aid kit and laft the contents, including condoms) out in the middle of the shelter. Seriously, dumbass, you couldn’t take that 13 ounces of weight with you? You brought it in, you PACK IT OUT. Some people’s children… 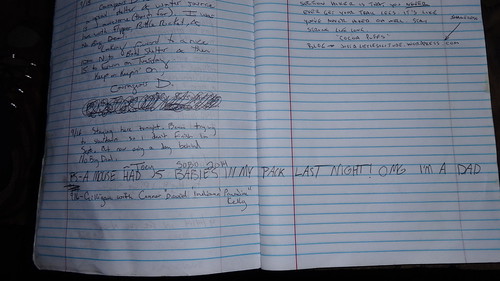 It was about 7pm when I settled in the tent for the night. Temperatures were  hovering around 60 which was great to sleep in. As for the solitude I was seeking? Well, I got it! There’s not a soul up here on the ridge but me and the creatures. Every other hike of mine by now someone had either come up in the area or was already there but not tonight. As I was getting my backpack and shoes situated, there was a little drawstring bag I’d forgotten about in the bottom of my bag. In it was my hand sanitizer. I soaked my hands in it.

Once the sun set, the frogs or crickets or whatever it was started chirping. LOUDLY. There seemed to be thousands of them. This was not the kind of pleasant sound you hear on those nature recordings that are supposed to lull you to sleep; this was NOISE. Someone may as well have been running a chainsaw all night because that’s how loud and annoying whatever those creatures were. I’d had a slight headache (wasn’t feeling hydrated) and was getting annoyed.

The rest of the night was spent waking up every 30 minutes trying to distinguish what new animal was making noise outside my tent. I  identified the hoots from a barred owl (“who cooks for you”) heard  a fox chirp a few times, a mouse scurrying outside and what I can only think was a black bear vocalizing. I’ll say that one more time. I’M PRETTY SURE I HEARD A BEAR. That and OH GOOD LORD WHAT INSECT IS MAKING ALL THIS RACKET I CAN’T TAKE IT THEY’RE EVERYWHERE SHUT UP SHUT UP SHUT UP PLEASE!

Sheesh. Glad I packed a “little something” to ease me off to sleep…Good night! 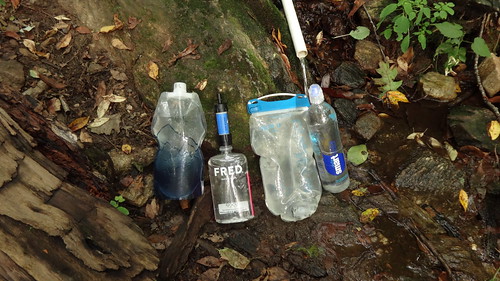 The spring at Hogback Ridge. 1L Platy bottle for overnight filtering, Fred water bottle for instant drinking through filter, and the 1.5L Platy and Smart Water for clean treated water.