Never measure the height of a mountain until you have reached the top. –Dag Hammarskhjold

My alarm went off at 0630. I knew I was going to take forever getting everything organized and ready for my hike, so I didn’t lolligag around in bed. The AC last night kept oscillating between ice cold air and a moist breeze. Oh well, I appreciate the fact that I had it at all.

Once I reorganized everything around in my truck, again, I set off for the public parking lot, and was stepping off across the French Broad River. At the end of the bridge, the trail switches back beneath it, so you have to hop over the guard rail. There were several double blazes indicating this, but having read it in the guidebook was a help too. 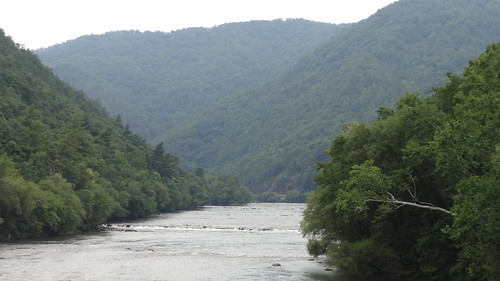 The trail went past a field and parking area and past a few houses. I noticed one of them had a rather large Confederate flag flying. That’s the 4th or 5th one I’ve seen so far; they seem to be a lot more prevalent here than I’m used to. Oh well. Just one more thing to be aware of. The trail paralleled the river, and I stumbled upon several campsites, some occupied. Across the river I could hear country music playing at another, larger campsite. It irked me to hear it all the way over here, when the morning is supposed to serene and calm. That, passing the Confederate flags, and walking along the river bank with random fire rings and tents around gave me a weird feeling- not really uneasy, more like unsettled. I didn’t care much for it and was happy to start the incline up Lover’s Leap.

The climb was very steep, but short and interesting enough to keep it from being overly difficult. It definitely got my heart rate up. Lover’s Leap is a rather prominent rock outcropping across the river that rises over Hot Springs. It is composed of quartzite, a rock that has a very angular shape that makes for impressive formations. I really enjoyed meandering over them, and took a few moments to drink in the view from a couple of side vantage points. 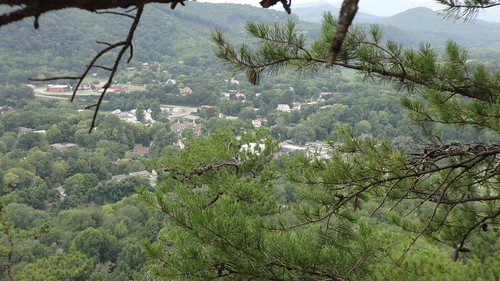 View down into Hot Springs from Lover’s Leap 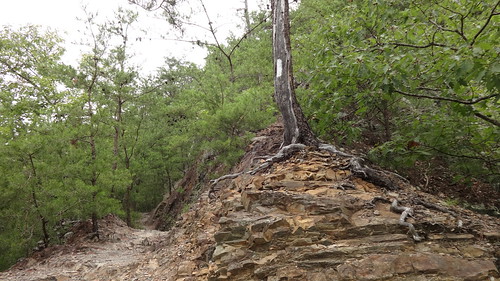 A gentleman came up behind me while I was snapping some pictures on my way up. I offered to let him pass, but he said “take your time”. Well, my legs are still very sore; even though I was making really good time, I knew at some point I was going to run out of juice. I insisted he go ahead. Bonus- he would be busting all the spiderwebs up ahead so I wouldn’t have to deal with them. You always have to think about 2nd & 3rd order effects out here!  We leapfrogged once or twice, and passed by a group of youngsters. “Did you encounter any bees” I asked. “yeah, we saw a couple but a lot were dead”. Good for them.

Two guys were coming up the hill towards me at a breakneck pace. I got as far up on the side to let them pass. They were moving like something was chasing them. Guess everyone gets their workout a different way.

Once over Lover’s Leap, the terrain changed from rocky and craggy to the pervasive rhodo thicket, with a few pine stands thrown in for good measure. It traversed a ridge with the usual hardwoods and associated plants. One day I’ll get to identifying them. At 1040 I hit the AT/ Pump Gap Trail intersection and took a little breather. It wasn’t hard going, but when I tallied up the miles & my speed, I was actually going to reach Tanyard Gap more than 90 minutes early. I passed two ladies out for a stroll in the opposite direction and they too mentioned the mutant bees at the steps near the overpass. This is gonna be fun avoiding them.

I walked by a very scummy, nasty stagnant pond, and while peering through the muck I was surprised to see a fish swimming around in it. The guy I kept meeting up with was sitting on a bench reading a book. He eventually caught back up with me at the Mill Ridge meadows, a densely vegetated field with small trees and fruiting shrubs, managed by the US Forest Service and the NC Wildlife Resources Commission to provide food and brooding areas for a lot of animals. No, I’m not some wildlife genuis- I read the sign that was posted there. 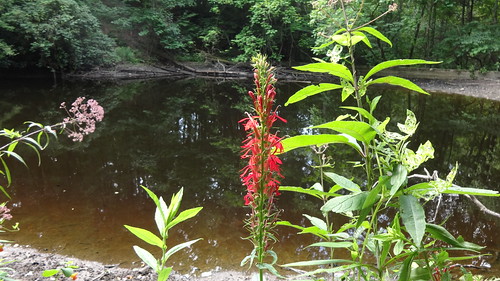 We walked along for a while and made the necessary introductions, His name is Phillipe, and he’s a trail maintainer with the Carolina Mountain Club, the organization responsible for maintaining the area between Davenport Gap and Spivey Gap, some 92 miles. I felt bad about griping to myself about the faded blazes and bushwhacking that I had to do coming down from Walnut Mtn and around Kale Gap, but his area was at the far southern end of their area. I did mention some of the blowdowns and blazes & he said he’d bring it up at their next meeting.

I passed a crude warning sign, fashioned from what looked like medical tape, that simply said “WASPS” with an arrow. Hiker ingenuity- create something out of nothing. When we got to the steps (him leading the way) he called out that they all seemed to be dead. I stepped gingerly over them and what do you know, apparently someone got the message and came out here with a can of bug-be-gone and took care of them . There was a mile marker indicating this was Tanyard Gap and the 277.7th mile (NOBO). I snapped a picture of that, got a few pictures of the bees (they were bees, not wasps or yellow jackets), when one apparently pissed off survivor buzzed by my head. I must have covered the 20 feet or so between the sign and the road in 0.04 seconds!

Right down the steps was the overpass that I had driven under coming into town. There were good views from in both directions; looking southeast was Walnut Mountain and Bluff Mountain, and looking north (I later found out) was towards the Sams Gap/Big Bald area where the trail doglegged back around going towards Erwin. A group of guys from Raleigh had just come in SOBO from Spivey’s Gap. We  talked the usual, how was the trail in your direction, was the water flowing at the springs, etc. They were particularly interested in my pack weight and how I’d decreased weight over a few months. One guy had a ULA Catalyst in purple (cool). They offered me a beer, and I graciously accepted. Philippe took off and continued his hike NOBO. 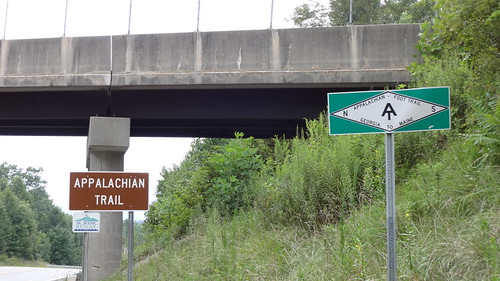 Donnie from Bluff Mountain Outfitters picked me up. He pointed out Bluff & Walnut Mountains from the overpass. No way I climbed those. My shuttle ended up being complimentary (he was a former Air Force Warrant Officer). Nice guy. After I was dropped off I went to Smoky Mtn Diner but I wanted to watch the NASCAR race and they didn’t seem to have any TVs in there so I went back to Still Mountain. My waitress from yesterday said Well hey, you’re back”. I had giant cheeseburger, and moved over  to the bar so I could watch the race undisturbed.

Right after the race was over I stopped by the gas station to grab a Monster for the road and departed Hot Springs…sore but content. 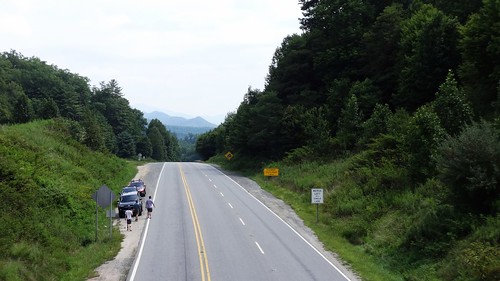 Looking NE from the 25/70 overpass 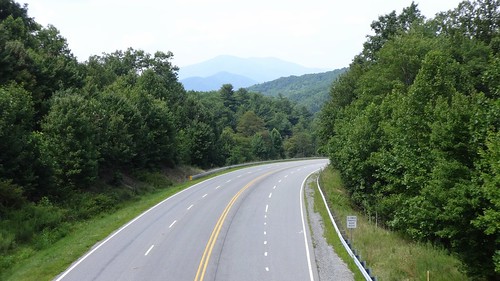 Looking SE back towards Bluff Mtn 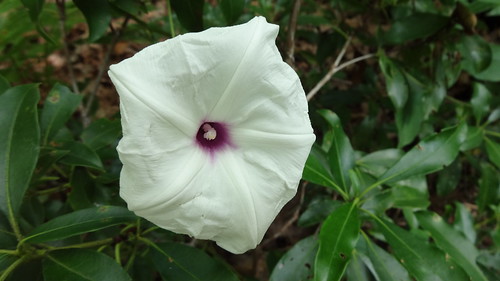