But they that wait upon the Lord shall renew their strength; they shall mount up with wings as eagles; they shall run, and not be weary; and they shall walk, and not faint.

My alarm rang at 0615. It was a rather peaceful number, entitled “Dawn chorus alarm”. Figured it fit the occasion, and wasn’t harsh enough to jar me awake in a panic. Maybe it was a little too peaceful; I laid back down and closed my eyes for a few more minutes.

Last night got just a little chilly, not enough to keep me awake but enough to make me glad I spent the money on the liner for my sleeping bag. After I packed up and hit the privy, I set out for my destination- Hot Springs. Right around 13 miles. Yes- I’m going to do it. There was a liter and a half of water in my Platypus and the springs were ample according to the guide, so water wasn’t a concern.

The trail descended down Kale Gap (mi 261.5, elev 3714′), and it was full of undergrowth, some as high as my head at times. There seems to be a few particular plants that grow along the Southern Appalachians that get out of control here. It was the same type of brush encountered going up Roan at Beartown Mtn. At Catpen Gap (mi 262.2, elev 4135′) there was a meadow off trail that apparently had a good view of Max Patch, but I didn’t venture out as I was unaware until later on in the day when I read the guidebook. My main priority was to get a GPS signal, which I finally did get at the edge of the clearing.

The ascent up Bluff Mtn (mi 263.2, elev 4686′) wasn’t too bad since my legs were fresh, and there wasn’t a heavy load of water occupying my pack. A rather large and flat campsite was near the summit, with space for at least six or seven tents and with a big fire ring it seemed like a great place to camp out. Breakfast at the summit was some dried fruit and a Kind bar. Kind bars are awesome! My favorites are the cranberry & almond and the vanilla blueberry. They tend to get sticky but are oh so good. There was a spring about 50m down from the summit that unfortunately had a lot of sediment in it- the only place to fit the mouth of my bottle in wasn’t in the best place, and I’d stirred the water up trying to get it situated. Oh well. Filter it through a bandana and drive on. 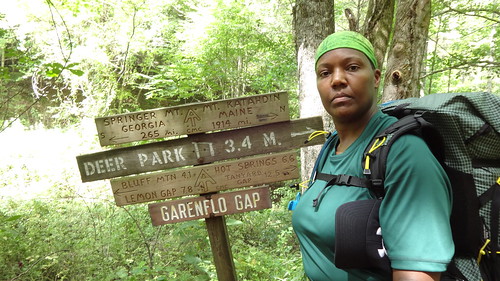 Mini-lunch was at Garenflo Gap (mi 263.7, elev 2500′) a bit after 1100. I was making good time & decided this was as good a rest stop as any. For a quick bite to eat I had an MRE meatloaf entree, which was perfect since it didn’t require any boiling water. There was a slightly (very) unappealing gelatinous glaze on it because I wasn’t using the heater to warm it up, but calories are calories and it needed to be eaten. Half of it needed to be eaten at least. I guess I squeezed a little too hard pushing it up because the other half plopped out of the pouch and onto the ground.

Glaring at the chunk of meat, now covered in dirt, that was supposed to be in my belly I angrily grabbed something else out of my pack to eat. I don’t even remember what it was except for it not being enough for lunch.

There seemed to be a lot of obstacles on the trail where several trees downed trees  required either climbing OVER or crawling under. Once I reached Deer Park Mountain Shelter (mi 270.7, elev 2339′) I (reluctantly) polished off a pouch of Albacore tuna in olive oil and a pack of Belvita crackers to make up for the lost meatloaf. That’s not something I would normally eat by itself (oily fish) but a lot of thru hikers have mentioned their consumption of olive oil to boost their calories, and calories=energy out here. There was a blue blazed side trail with a campsite, and the water source was not a spring but a weakly flowing, shallow creek, no more than 2 1/2 feet across and maybe 3 inches at its deepest. A lone frog was hanging out in the middle, so I went upstream a little to collect my water. This would be the first time I’d collect water from a source that had inhabitants, at least one that I saw in close proximity. I get my bottle in the water about ten feet away, and something starts wriggling around and almost swims into it! A tadpole. A freaking tadpole almost swam up in my bottle. That was worth a laugh. Sorry, you’re not the kind of nutrients I’m looking for, pal. Move along. 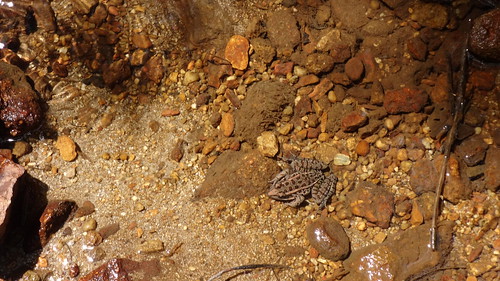 The shelter looked dark, dank, and creepy. No way would I sleep in there if I could help it, just looking in there gave me the heebie-jeebies. Ugh. A lady named Heather wrote in the register that she was doing her first solo overnight hike, and she was getting freaked out about all the spiders. I wrote some words of encouragement for her saying that I myself was overcoming my fears, phobias, and doubts (slowly). Nothing like a couple of nights of self-induced exposure therapy. Heather, if you ever read this, I hope you get back out here- you’re missing out! 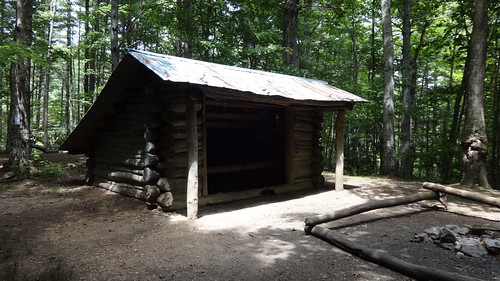 The ascent up Deer Park Mountain was short but steep. A few minutes later a guy came up going SOBO. We stopped & exchanged trail conditions and he said that right near Tanyard Gap, on the steps coming down to the overpass there was a bee’s nest of some sort, that he’d been stung a few times, and had to stay in Hot Springs for a few days recovering. A call was made out to the Carolina Mountain Club (who maintains this section of the trail), but he wasn’t sure if it was taken care of and for me to beware. Good deal, and I appreciate the heads up.

There were a few times where I got in the “zone” and almost took a few wrong turns or realized I hadn’t seen a blaze for a while. Several blowdowns littered the trail; well not SEVERAL, but more than I remember on my other hikes. I’m not complaining, hell, at least clamoring over the trees kept me alert. After skirting the summit of the mountain, I popped my headphones in and started singing (loudly and probably off key-who cares) on my way downhill. Anything to stay occupied and motivated, you know?

While I was singing, a little 3 inch stump just up and caught my foot and tripped me. Once I collected myself (didn’t fall), I turned around, glared at it, them took my heel and proceeded to eliminate to from its stronghold, as if to express my displeasure at it disrupting my crusade. Stupid stump! Hey- you know I think I just saved my fellow future hikers from peril. (You all can thank me later). Unfortunately, kicking the ever-loving crap out of that stump took its toll. The “stay home” piggy on my right foot bore the brunt of the impacts. (NOTE: the “stay home piggy” is, well, you can figure it out. Say the rhyme in your head!), so now it hurts like a MOTHER.

Needless to say, the descent into Hot Springs was loooooooooooooooooooong. Reminds me of coming down the northern slope of Hump Mtn last month. My quads were quivering and shaking whenever I had to step down over an obstacle . A few times I had to stop on the side in order to stretch my legs out. Uphills are hard in their own respect, but downhills, especially the sustained descents over switchbacks and steps, are a different kind of hard. Coming down I could hear a lot of motorcycles in town, Harleys specifically. The weather was lovely and seemed perfect for riding. The close proximity of the bikes encouraged me to keep going. 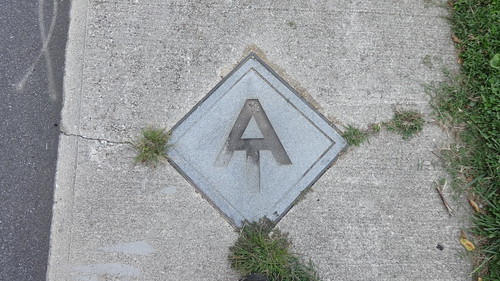 AT logos stamped into the sidewalk in Hot Springs

Once I got down to “earth level”, what was sitting right off the trail, about 30 feet away? None other than the Laughing Heart Lodge & Hostel. Huh. I’d heard about it but didn’t realize it was so close to the trail.There was a note on the door saying to call Mitch to get a room. I copied the number in my phone & decided to hightail it back to my truck first. Changed my shirt and ran a bath wipe across my torso, then drove back to the hostel.  Yeah, I said I ran a bath wipe over my torso & then changed my shirt. In the parking lot. Midday. Hiker trash doesn’t care!

For dinner I walked over to the Still Mountain Cafe, and ordered their Pulled Pork & Andouille sandwich with fries, washed down with 2 PBRs. Damn, that was good. The waitress was very friendly and attentive, so kudos to them for that. After I finished, I strolled over to BMO & scheduled a shuttle for tomorrow to pick me up from Tanyard Gap & bring me back in town, since I had an extra day to burn may as well be walking. Jennifer Pharr-Davis’ book was for sale there. What better reading material than that?

I drove back to the hostel and boy were the mosquitoes out with a vengeance! The Dollar General didn’t have any citronella candles. The clerk said “they were out of mosquito season”. Really? Because I’ve been ASSAULTED by the little buggers. I couldn’t burn any coils inside, so I sprayed some repellent around. The room alternated between being too hot & too cold, but who am I to complain? After a good Aspercreme rubdown, I didn’t care. I rearranged and repacked my stuff for tomorrow, and buried myself inside my liner. One thing, my feet. Were. Horrendous. Almost half of both feet were peeling something awful. There were the beginnings of a little blister on the side of the piggy that got stubbed today. It was just ever so tender, and not big enough to warrant a poke. Later. 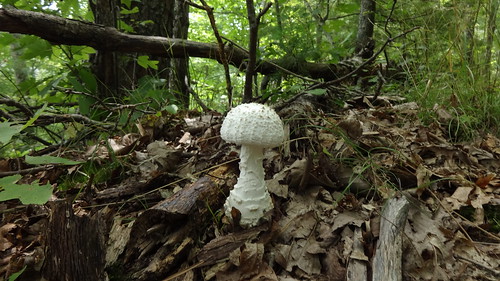 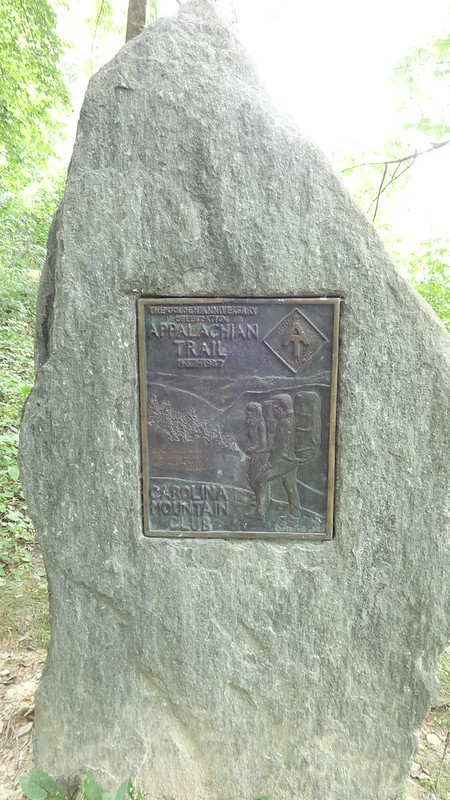 Monument at the bottom of the hill near Laughing Heart