Like all great travelers, I have seen more than I remember, and remember more than I’ve seen.  -Benjamin Disraeli 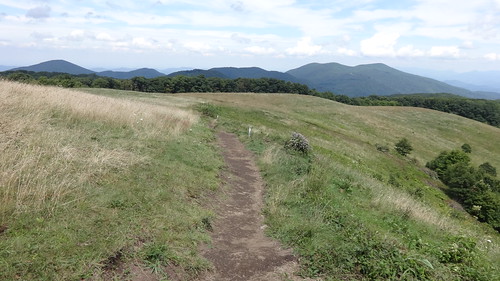 An old Army buddy of mine (and fellow jumpmaster extraordinaire) was going to shuttle me to Max Patch from Hot Springs to start my next section hike. Rolled into town around 11:00. It’s smaller than Damascus- I’m really getting a taste of small-town America, even if it’s a haven for hikers and motorcyclists. As I was coming down the hill on US 25/70, I passed underneath a footbridge carrying the AT, marked with two signs. Very nice. Wonder if I’ll be crossing that footbridge on this trip!

My first mandatory stop was to the Bluff Mountain Outfitters. They have a pretty good selection of clothes, gear, and the requisite souvenirs, but where they really shine is the food- not just freeze-dried Mountain House offerings, but organic choices, fruit bars out the wazoo, nuts, jerky and cane sugar soda (score!). It all seemed a little bohemian and “hippie-ish”, but that wasn’t a bad thing. I snagged a couple cool stickers and bought a sleeping bag liner, worrying that wearing shorts and a t-shirt in my (Army issue) patrol sleeping bag may chill me a bit (temps that night were forecast to be right around 48 at elevation). The town doesn’t have a supermarket, only a Dollar General, so I’m sure they make a good bit of coin selling foodstuffs. The folks there were friendly, just as in Damascus.

Anyway, I met Jeremy at the public parking lot (which is nothing more than a gravel lot behind a restaurant and a small cottage-styled motel/hostel), grabbed my bag, and we were off. We spent the ride catching up on the last 12-13 years, and after a wrong turn or two, arrived at the Max Patch parking area, and I was off.

The walk up to Max Patch wasn’t too bad. The summit provided very nice views of the Smokies to the southwest and Mt. Mitchell to the east. For some strange reason though, I wasn’t blown away by the view. Don’t get me wrong, the summit of Max Patch is beautiful, but (to me) not as beautiful as the Roan Highlands, Little Hump, and Hump Mountain were. It must have had something to do with a strenuous climb to see the Humps, and barely any effort to see Max Patch. Who knows? Reached the top in 20 minutes and spent another 10 fooling around with my camera. 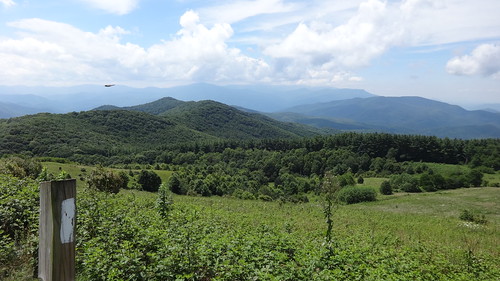 Hiked at a 2mph pace down to Roaring Fork Shelter. On my way down I passed under some very impressive (and dark) rhododendron tunnels. It was sunny outside, but seriously dark in there. I took a few photos, but they don’t convey the awesomeness of walking through them. At the shelter were two men; 1 in his 50s/60s, another in his 30s with a small boy. They said they were headed to Walnut Mtn as well. One little tidbit about Roarin Fork Shelter- apparently there are bears inb the area that areen’t very afraid of hikers. There’s even a YouTube video about an encounter some hikers had with one a few years ago. Having said that, this wasn’t a planned stop by any means (it was still very early). I signed the log book, and got back on the trail. About 40 min later I passed them up. The guidebooks had conflicting notes about water availability at the springs along the way, so I topped off at Lemon Gap. There was a kickass campsite near one of the streams going up. If I ever come back this way, I am camping there for sure. 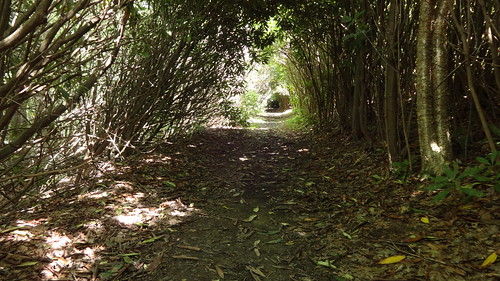 The trail up wasn’t steep, but it was moderately overgrown in some spots. It was almost as bad as Beartown Mtn a few weeks ago. I HATE feeling like I’m bushwhacking. I just KNOW I’m gonna get a tick on me. UGH. Most of the ascent up Walnut Mtn was through this crap. Finally reached the shelter. It was very dark & small & old. I may come off as condescending- that’s not my intent. This was just the first impression I had of the shelter. Hell, I wasn’t going to sleep in it anyway, so it didn’t matter to me how it looked. 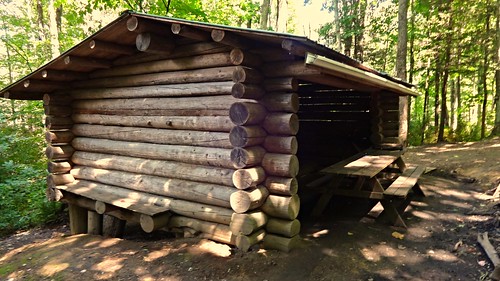 Walnut Mtn Shelter has cables to hang your food bags from, since apparently bears have migrated NE from the Smokies to here, and as the ALDHA Guide says they don’t fear hikers. How nice. Although it was an extra 12 oz of weight, I’m glad I brought my bear spray. Set up camp above the shelter, attempted to make a fire that burned for a few minutes, then petered out, and ate dinner. I almost had a fire going. Almost. But I failed. AGAIN. I had brought a new Snowpeak canister for my Jetboil that wasn’t the original, and the thing threw a flame about a foot high. I trudged down the blue blazed trail to get some water. It was VERY thick with vegetation at least 5 feet high. There were two spots where obviously a large mammal had crashed through, flattening the plants. Soon it pretty much closed in on itself, and that’s when I was GLAD I topped off at Lemon Gap. Uh-uh, I was NOT going to bushwhack (again) to get water. Nope. My 1.5 liter Platypus was full, plus I had a full 16 oz bottle. The only big climb is early tomorrow up Bluff Mountain, and it’s all downhill after that. 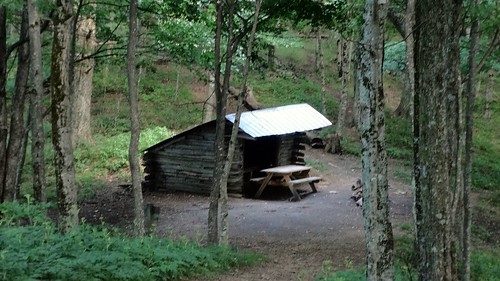 The older gentleman turned out to be a retired Marine that lives in Columbia, SC. We talked fo quite a bit about our experiences in the military, and at one lull in the conversation, we both (unwittingly but simultaneously) stopped to take our nightly handful of medication. We literally paused and popped our pills at the same time! That was funny.

Now I’m contemplating- do I stop at Deer Park Mountain tomorrow (as planned) or hightail it all the way to Hot Springs? If I push it into town, it’ll be right around 14 miles, including the side trails to the shelter & water. I would want to get in HS by 6 pm so I could a) stay in town, or b) have enough daylight (and energy) to drive back to Charlotte. This will entail doing roughly 6 miles in the morning and 8 miles in the afternoon. Heck, if all else fails, I can sleep in my truck in the parking lot. Won’t be the first time! We’ll see in the a.m. I’ll deviate from my Type-A, typical Capricorn plan-everything-to-death personality and play it “loosey-goosey”. Depends on how my legs feel.

The sun has long since set and I hear animals shuffling around in the forest. Are they bears? Will my food bag be there in the morning? Will I attempt to make it 14 miles into town?

I’ll sleep on it. 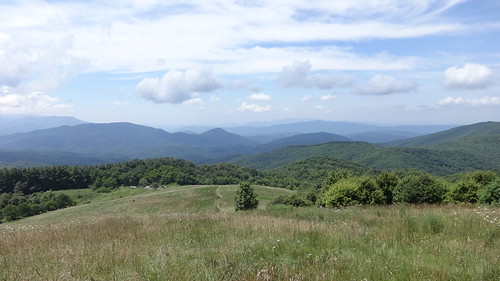