“Those who contemplate the beauty of the earth find reserves of strength that will endure as long as life lasts.”
― Rachel Carson

Links to the photos are not working right now. I will fix them soon. Thanks! 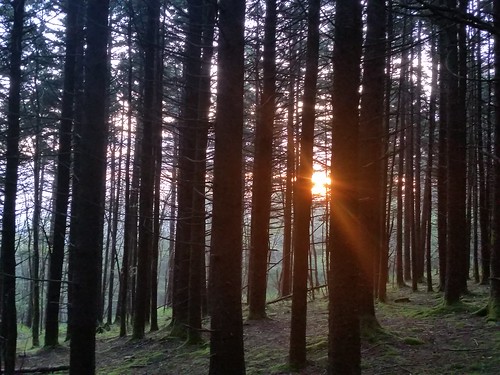 That’s how I woke up this morning. Not my alarm, not being attacked by “squatch”, but birds. It was just before 6 am, 45 minutes before my alarm was set to go off. Let me tell you something- there is no better way to wake than this. No harsh alarm, no phone ringing off the hook, no noisy neighbors, etc. Just God caressing your eardrum with the sweet sounds nature, seemingly saying “the forest is waking up, you should too”.

Forgive me if I waxed poetic, but wow! I had a great night’s sleep. The limbs on the trees are absent 20-30 feet up the trunk, so I kept my food in the tent with me. No mice, no animals, nothing. I remember falling asleep reading, changing positions once or twice, but it was such a good DEEP sleep.

Anyway, it was time to get to the next must-see area, Beauty Spot. My awesome Easter plan was to do this very same hike, and spend Easter morning atop Beauty Spot. Of course, my truck had other plans and demanded repairs. I hated leaving Unaka; she took great care of me yesterday.

The spruce and firs gave way to deciduous trees coming dow to Low Gap. There was a hiker behind me who eventually caught up. Stopping to snap a picture I offered to step aside & he said “no you’re fine, you’re walking right at my pace”. We both got to Low Gap for water and talked for a little while. “Knothead” is from Kentucky and doing a section from 19E to Erwin. Down at Low Gap, there were a few tents set up downhill from the spring; I didn’t know there was space for camping, but after getting assaulted by gnats and mosquitoes at the spring, maybe it’s not so great a spot.

While we were there a guy named Bear Claw came by talking to Knothead. Apparently they met on the way up to Unaka yesterday. Bear Claw is doing a flip-flop, except he started at Harper’s Ferry and is hiking south to Springer, then returning to head oto Katahdin. This was the first time I’d heard of that, but I’d later find out he would skip a section of a hundred or so miles that he did last year. Still a thru hike to me, & others would disagree, but HYOH, right? 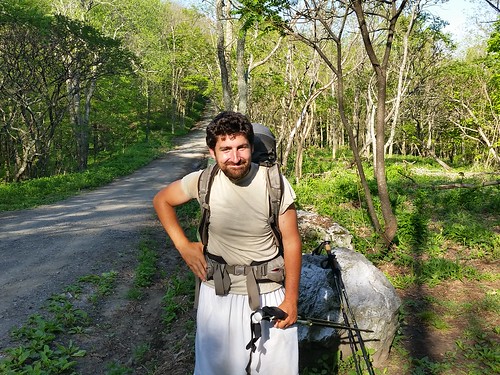 Knothead started up the hill from Low Gap before I did. A few minutes later I caught up to him as he was taking a break and said “Okay, it’s not just me, but this IS a steep hill”. What I couldn’t do was stop. It was kicking my ass, but I just kept chugging along, and I’m going to tell you something- he motivated me, but not how you think. I was motivated by the fact that I was at least keeping pace with or outpacing a man younger than me. I’d been hitting the Stairmaster and elliptical at the gym pretty hard and doing a lot of training hikes with 35+ pounds in my pack, and it seemed to be working. All the way to Beauty Spot I was the one “on point” (Army slang meaning I was in the lead) and with him behind me I was motivated to hike a little faster than I probably would have by myself. 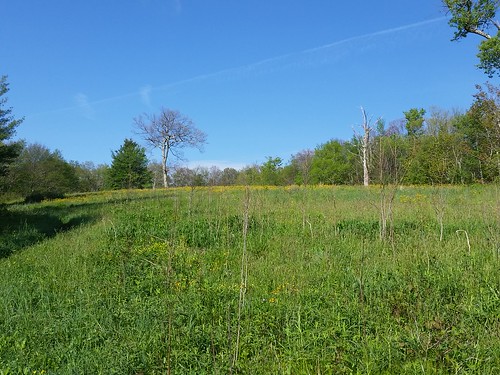 We eventually came to a meadow where I could turn around and see Unaka behind us. A lot of perspective is gained when you can look back and actually say “I climbed that mountain”. I mistook this meadow for Beauty Spot, forgetting that Beauty Spot has a parking area nearby.

When we finally got up to Beauty Spot (mi 352.6, elev 4437 ft) it was worth its name. 360 degrees of awesome. Unaka, Mount Mitchell, Roan Mountain, Bluff Mountain and the Smokies behind were all visible- absolutely gorgeous. It helped that we were above a small cloud deck off to the southeast, but that made it even better. Only downside was the flies. There were so many flies you could her the annoying buzz all over, but I didn’t let that ruin the beauty. 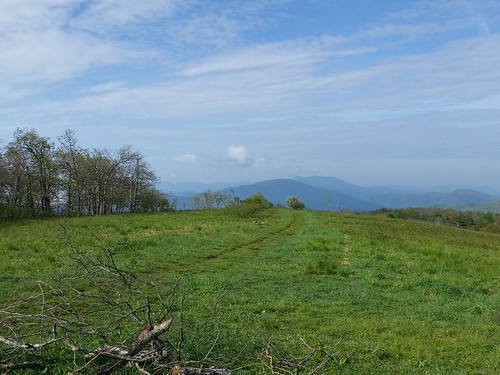 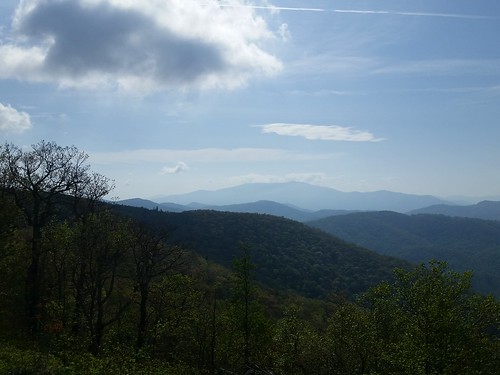 After spending about 30 minutes at the top, I headed down to Curley Maple Gap shelter (m i346.2, elev 3083 ft) where I’d originally planned on stopping for the night, but with the decent time I was making coupled with my Type A personality, I was gonna push all the way into Erwin from Unaka.  I lost Knothead a few times- he would stop and take a breather going uphill, but I kept on truckin’.

I got to the shelter just before 1, and Bear Claw was already there laying down with his shoes off. Curley Maple Gap is a pretty big double decker and looks to be one of the nicer shelters I’ve seen out here. The three of us sat down & talked about random stuff for a while, then Bear Claw set off. He’s averaging 20+ miles a day, so I knew he’d make it to Erwin in no time. Lunch consisted of a Kind bar and a Star-Kist lemon & dill flavored albacore tuna pouch, which, after I ate the last bite, I promptly drank all the remaining juice from the pouch. 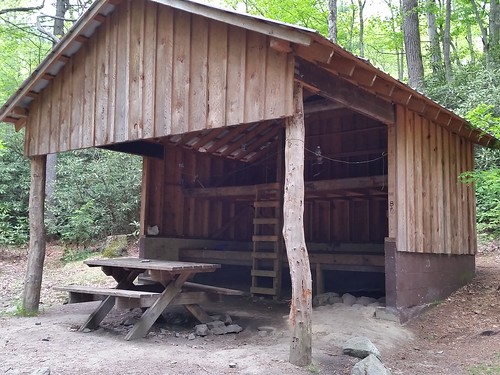 Some jackass hiker who calls himself “The Real Hunny Badger” had tagged the side of the shelter (again). I’d seen his “handiwork” on shelters and signs a few times between here & Damascus, and apparently word got around up & down the trail, and he was apparently shamed into ceasing and desisting his antics. I hope he learned his lesson. Now, I will say this- some “graffiti” seen on/near shelters is actually helpful. More than a few times there were impromptu notes left detailing where the good water sources were, or milestone mileage points. That I have np problem with, because it benefits everyone, not just some random person with a “hey look at me” complex.

“Look at that snake over there”. Knothead. “What snake, where?” He said, over by that tree. Sure enough, a black snake had half its body up the trunk and the other half on the ground. Whoa.

Now, let me tell you, I’m not a snake person. I’ve run into two snakes recently either inside my house or in my backyard, and they were both met with an untimely, horrific, and violent death. Because they were in my environment, and they’re snakes. Out on the trail however, they don’t bother me at all; I’m actually curious like “ooh, looky, a snake” and try to go take a picture of it and observe it. It’s a strange phenomenon. Any uninvited animal that makes its way into my house (beetles, spiders, snakes miscellaneous bugs) is going to be terminated ASAP, but, I will make it a point to not step on a millipede (or spider or random bug) while I’m walking on the trail. Seriously. Now if any bug gets in my tent, game over. I guess as long as I’m in their house and they’re not trying to bite/sting/poke/eat/injure/maim/kill me, we’re on good terms. 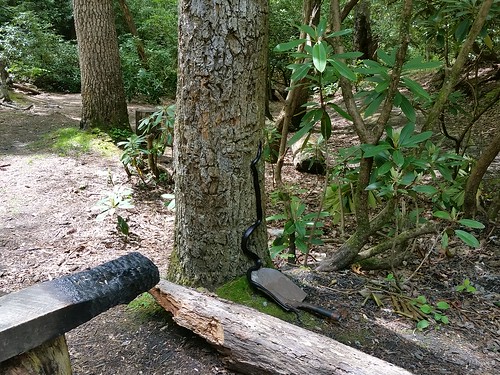 Knothead took off about 15 minutes before I did. It was pretty much cruise control all the way down to Erwin. There were plenty of flame azaleas and mountain laurel in bloom, and at one point when I stopped to tighten my shoelaces, I happened upon a Black Swallowtail (Papilio polyxenes) and snapped a few pics of it (later I would find that they all came out blurry. Rats).

The trail crossed a stream called Jones Branch a few times over wooden bridges, and wouldn’t you know, about 2 1/2 miles out it began to rain. I quickly threw on my pack cover and my brand new Outdoor Research Helium II rain Jacket, and continued on. Donning that rain jacket was a mistake- it’s super lightweight (7 ounces!), but not breathable at all, as I was instantaneously wet inside and out. The rain stopped about 6 minutes after it started, and the trail wound down towards the Nolichucky River.

Fun Fact: The Nolichucky River flows unimpeded (not controlled by a dam) from it’s headwaters near Mount Mitchell. This particular section near the trail is rated Class III-IV whitewater.

The sun peeked out and started drying me off again. I was chugging along when the trail (for some odd reason) shot back UP a rock formation. Why? Why do I always end up having to go UP to get DOWN? Arrgh! According to the AT guide, this part of the trail was carved out of the rock with a jackhammer. Thanks to the folks who did that- one could only imagine lugging a jackhammer up here.

I finally got to Uncle Johnny’s at about 3pm. As I was walking to my truck to set my pack down, Bear Claw came up to me with a bottle of apple and orange juice in both hands. “Here, have one” he said. “Oh thanks, but I have water here in my truck”. “Is it cold, because these are”. Well, I couldn’t argue with that logic. Much appreciated, Bear Claw. 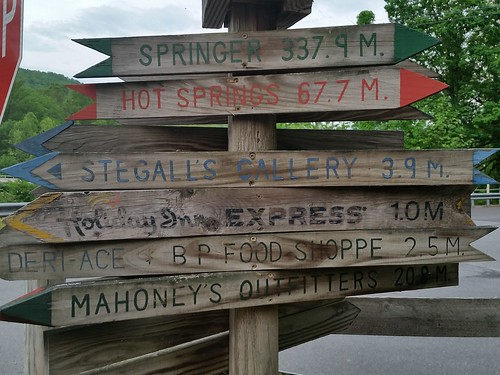 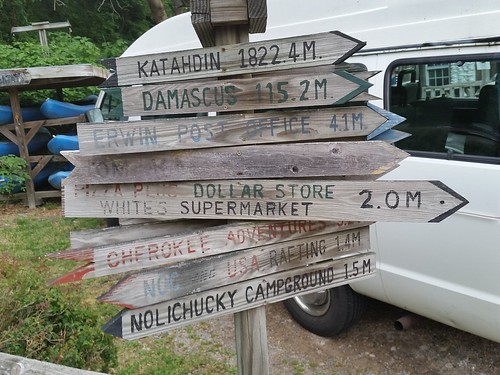 My original plan was to run into town for food & crash in my truck overnight, but “Sarge” (the guy who picked me up when I bailed out at Spivey Gap last year) convinced me that I’d lose my parking spot & to just camp out on the property. So for about $11, I set my tent up in the yard (there were several other tents out), got showered, and rode the evening shuttle into Unicoi with the other hikers. Note- I’d had a pair of jeans and a cotton t-shirt in my truck, but for some reason, I didn’t want to NOT look like the other hikers, so instead I wore my rain pants, another moisture wicking t-shirt, and my Crocs. Gotta look the part, right?

We were dropped off at a little plaza that had an Italian & Mexican restaurant. Most of us went with the Italian, which allowed you to bring in beer from the little package store next door (why don’t more places do this- oh, because they can markup the price of beer). After gorging myself on a giant bowl of baked spaghetti and garlic bread, we walked around Wal-Mart. I didn’t really need anything, so I bought a 12 pack of Pabst Blue Ribbon & waited outside for the shuttle to pick us up.

The rest of the evening was pretty uneventful, save for hanging around on Uncle Johnny’s deck drinking and watching the never-ending Jimmy Buffett concert playing on the TV. To my surprise, the old guy that was always sitting at the picnic bench writing down the shuttle schedules was Uncle Johnny himself! He had a friend with him that offered me some wine, and kept flirting with me. it was hilarious at first- he’d keep saying he had a lot of money etc. There were three other empty wine bottles on the table, and once I realized he & Johnny had gone thru all of those, I said it was time for me to turn in and went back to my tent.

Never a dull moment on the trail… 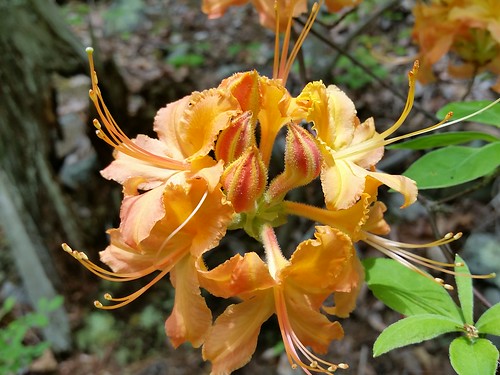 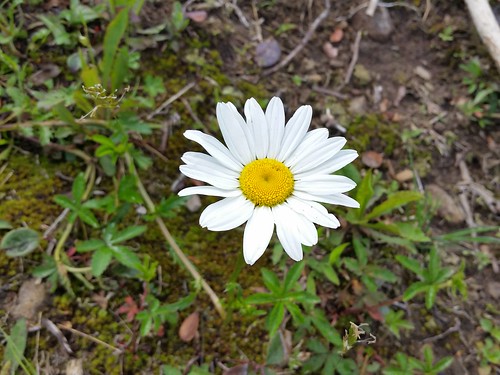