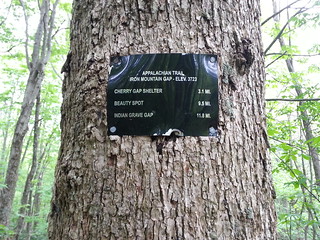 For once I arrived at my shuttle pick-up location on time. For the past couple of days, I’d been putting away a lot of water so I wouldn’t be dehydrated getting on the trail. It definitely worked, because I stopped 3 times between Charlotte & Erwin. I arrived at Uncle Johnny’s Nolichucky Hostel & Outfitters right at 0950 for my 1000 shuttle. Uncle Johnny’s was going to shuttle me, but they couldn’t get me out until noon, and I wanted to be out by 10, so I went with Tom “10K” Bradford.

10K was the shuttler whose info was on the business card I took down at Devil Fork Gap last September. I  had texted them that I’d taken their last card, and wouldn’t you know, he & his wife put 2+2 together and remembered me!. 10K (who has hiked the PCT) was a pretty cool guy. When I told him my plans to stop at Unaka & camp out instead of pushing on to Beauty Spot, he said that was the best thing to do. Beauty Spot has a lot of open campsites (it’s a bald summit), but there’s a Forest Service road & parking area right off of it, and with this being a Friday, no way did I want to contend with drunken locals. 10K suggested that I top off with enough water for dinner & breakfast at Cherry Gap shelter, since there wouldn’t be any springs until I come down Unaka to Deep Gap the next morning.

We arrived at Iron Mountain Gap (mi 362.1, elev 3,723 feet) at 1025. I got out, donned my pack, took a look at the white blaze across the road where I’d started my hike back in June last year, and set off southbound towards Erwin. The trail wasn’t bad at all; pretty well graded save a few uneven spots. I felt refreshed and eager to be hiking out here again, and with a base pack weight that was down to about 17 1/2 pounds, felt light on my feet. 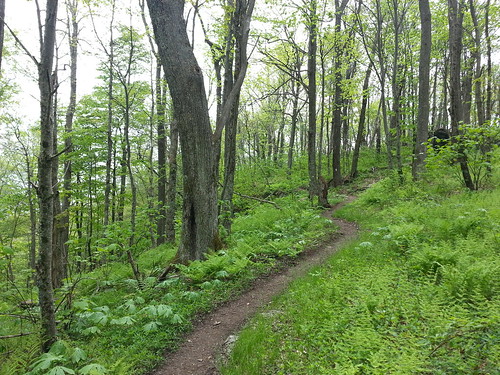 Shortly I arrived at Cherry Gap Shelter (mi 359, elev 4,012 feet). As I was taking a picture of it, I was startled by a man’s voice coming from inside that called out and said “Hey there”. I walked up closer and saw a middle-aged man sitting on the right side of the shelter in a sleeping bag, with a dog tied out along the rafter. “Hi there”. Immediately I wondered if he was a homeless guy- because he kinda looked the part- slightly disheveled, slightly slurred speech, with a crap ton of gear laying about.

Fun Fact: Cherry Gap Shelter was built in 1962 by the US Forest Service.

My plan was to sit here for lunch before heading up Unaka, but now I wasn’t so sure. This guy seemed a little “off”. He introduced himself as “Country Gold”, and his 1-year-old Plothound “Sunshine”, and said he was hiking from Erwin to somewhere in PA. When I asked him how long he was going to take, he said “Oh, I’ll get there when I get there”. I made some small talk, trying to be polite while I munched on a few snack bars and an Os-Cal stick (which, by the way, was pretty damn good). He noticed my MRE’s and said he was familiar with them, then went on to tell me Lillington about 15-20 years ago once he found out I was in the Army. He asked if I was hiking alone (stranger danger!) so I said “yeah, I have a few friends that probably stopped for an early lunch”. Why does everyone think it’s cool to ask a woman if she’s hiking alone? Stop it! Anyway, I noticed the reason for his slightly “off” sounding speech was due to the hearing aid he was wearing. 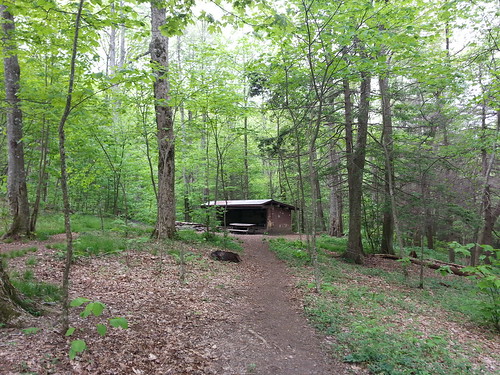 I went down to the piped spring behind the shelter to camel up and was pleased to see it was a gusher! The water was so cold that it gave me brain freeze a few times when I was chugging it down. Talk about refreshing! Since I wanted to get on my way, I headed back up to the shelter to see that Country Gold had come out of his bag and was sitting at the picnic table, and tied Sunshine out to a tree. He talked about how he stayed at Curley Maple Gap Shelter for a few days, was going to stay here for a day or two,and keep heading north.

No way in hell could I zero at a shelter- that would drive me batshit insane, just sitting there, looking at the walls, watching the vermin scurry around the shelter, and worrying about one of them strolling across my face…Don’t get me wrong, I enjoy being out in the woods, sitting still, enjoying Ma Nature. I can do it for hours on end when I go hunting but I couldn’t just do NOTHING but that all day. I’d have to keep walking unless I was really sick or hurt, in which case I’d call for a ride back to town.

At any rate, we talked about trail towns, hostels, and how Curtis Owen from Standing Bear Farm (the first hostel you reach NOBO exiting the Smokies, or the last sign of civilization for 70 miles heading SOBO into the Smokies). When I mentioned Curtis had died from pancreatic cancer, Country Gold went on to tell me that when his mother had died of pancreatic cancer in 2009, he attempted suicide shortly thereafter, and then put everything he had in a backpack and thru hiked the AT in 2010. At any rate, after I perused the shelter register (someone said it smelled like poop!) I said goodbye and beat feet out of there. 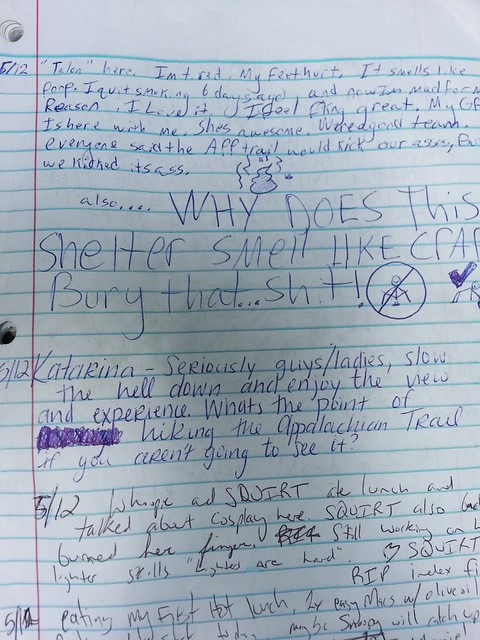 The hill leading away from the shelter was pretty steep, of course. Nothing gets your blood pumping more than stopping for food & water, and then being greeted by the trail’s omnipresent characteristic near vertical climb. As I wound my way thru the forest of blooming wildflowers, a dark ridge became visible through the treeline off to my right. I’d had a feeling that was my target; Unaka Mountain; looming ominously in the not-so far landscape. The Backcountry Navigator app on my phone confirmed it; once again I had a summit in sight, but this time I was ready. Pointing my pole at it in an authoritative manner and muttering I’m coming for YOU, Unaka, I set off. 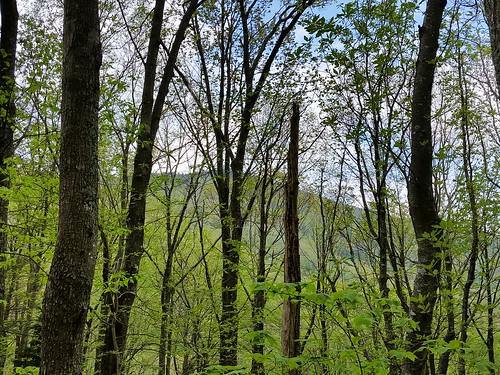 Unaka didn’t let me down; the elevation gain was hearty, but not a lung-burner. Remembering my bout with Big Bald last year, I promised myself the first available rock or downed tree I saw that I could use as a seat for a break, I was going to stop for a snack break. Of course, within 45 seconds of that thought, I came upon a perfect rock for that purpose. The trail provides. Halfway up to the summit, the terrain became a lot less steep, and the telltale spruces and firs were beginning to emerge. 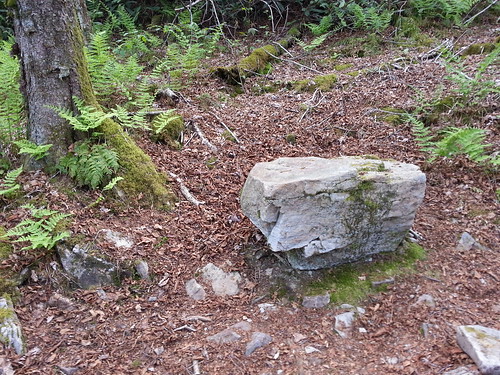 “Upon this rock, I will take a break”

Several hikers have done blogs/videos about Unaka, so I knew exactly when I was entering the dense forest at the summit. You’re walking along in a moderately open area, and as you approach you it looks dark as hell like there’s no light shining in there at all. I showed a friend the picture and he said no way in hell would he have walked in there. Instead of feeling any trepidation, my pace quickened. I was excited to finally be here. 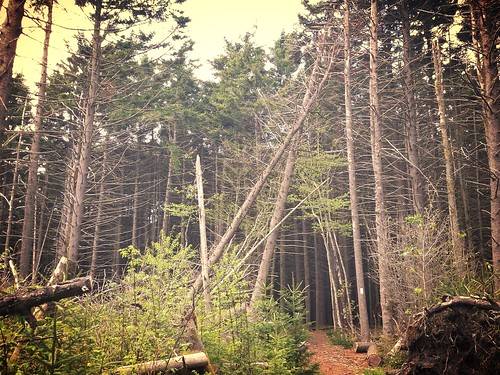 The doorway to awesome.

The top of Unaka (mile 355.7, elev 5,180 feet) was nothing short of enchanting. Yeah, that’s a corny description but it’s spot on. Bright green moss crept up the tree trunks, in stark contrast to the dark brown bark, and the forest floor was covered in pine needles and moss, making it very soft and spongy. I dropped my pack by one of the fire rings and just walked around, taking it all in. 10-15 years ago I would have never thought I’d be wandering around in a scary-looking forest by myself but this was absolutely cool.

Fun Fact: The name “Unaka” (pronounced oo-NAY-kuh) is thought to come from the Cherokee Indian word unega meaning “white” or “fog draped”. The town of Unicoi and the county of Unicoi Tennessee are derived from the same name although pronounced differently.

I set up camp, sat down for dinner, which was an abysmal disappointment. I’d bought a Mary Jane’s Farm dehydrated Shepherd’s Pie meal, and was curious as to how it would taste. Take some dry dog food, let it sit in water for a few hours until it’s mushy, toss in some stale mashed potatoes, add a teaspoon of pepper, and voila! you have exactly what this abomination tasted like. YUCK! Believe me, I tried hard to cram it down, but uh-uh, it wasn’t going to happen. The other bad thing was I couldn’t just dump it out (Leave No Trace!) so I had to roll it up as tight as possible, put a piece of 100 mile an hour tape on it (Army slang for heavy-duty olive drab duck tape), and pack it out until I got to Erwin, so I ended up eating tomorrow’s lunch for dinner, putting me a meal down, Luckily I always pack an extra couple snacks stashed away in case something like this happens. Only low point of the day. 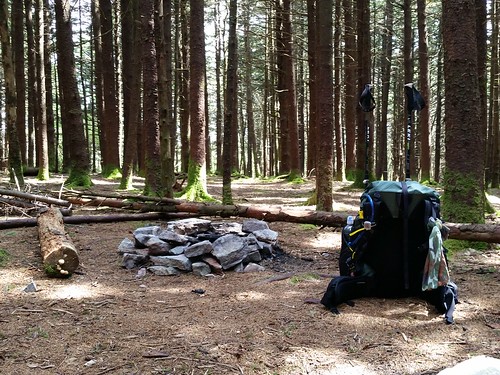 Surprise! I managed to get a somewhat robust fire going (finally! hooray!), and I could smell some other campers had one going. While I was walking around after the horrendous dinner attempt, there was a loud SNAP that came from some unseen part of the forest. Oh shit, just great, I finally get to see this magical place only to be decapitated by Sasquatch. It was someone collecting wood for their campfire, stupid imagination of mine. The rest of the night was spent reading, stretching my legs that cramped up for no apparent reason and moving my tent around to keep the campfire embers from setting it ablaze (I just pulled the stakes and drug it around like a bag lady dragging her shopping cart down the street. 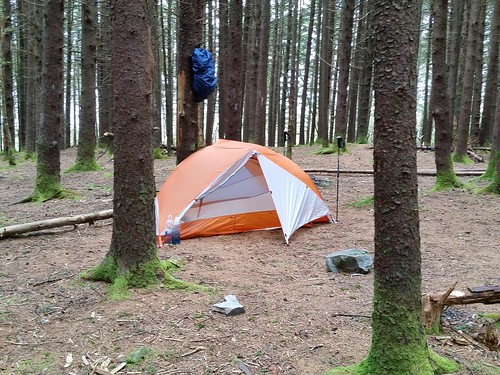 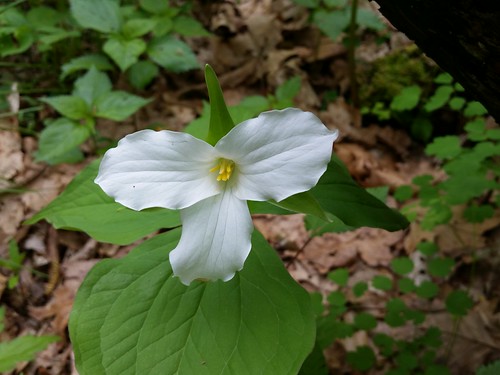